How to keep toys on their cards while still playing with them.

There was a discussion, recently, on our message board all about how to save blister cards. I described my preferred method as "a three-side 'under' cut," which is just the sort of babble that fails to make any sense unless you already know what it means. And since it's hard to describe, have some pictures:

So, get yourself a nice sharp blade. I use a Swiss Army Knife, because I've always got it handy, but a box cutter or an X-Acto knife would work just as well. You just need something thin and sharp. The idea, here, is that you'll cut free three sides of the card, leaving the fourth to act as a hinge.

You want to get your knife under the edge eventually, and in some cases there will be a gap where the glue didn't quite have complete coverage - in others you won't be so lucky, so you'll begin by carefully running the blade along the edge of the blister, just to cut the surface of the cardboard. Remember, there's no rush to this: it's perfectly alright to take multiple passes at the cut; if you hurry you may end up ripping more of the packaging than you want to; if it takes five passes to get under the blister, it takes five. Whatever. 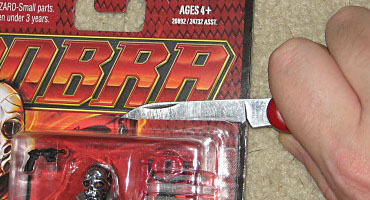 Once you get under the blister, you want to come right back up again - ideally you'll cut away only the bit of paper that is glued directly to the blister above it. You'll be left with only a thin strip of while flashing through the design where the blister was, and it'll be hidden when the package is closed again. 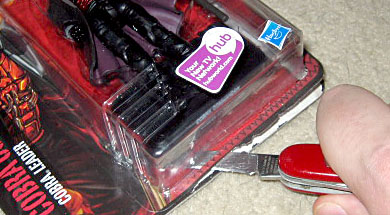 After cutting around three sides, you'll be left with a blister that's still firmly attached to the card, but can be lifted easily to let the tray inside pull out. When you're done playing, you can put the figure back in its tray and put the tray back in the blister, and you have yourself a great way to store the figure. 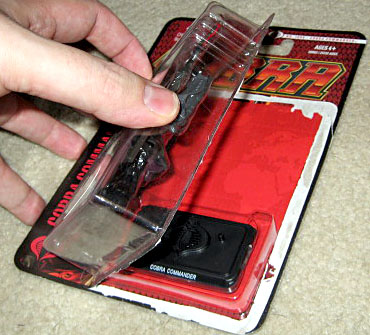 Eight years ago I wrote a Point of Articulation about why it was foolish to be a mint-on-card collector, and my feelings on the subject haven't changed. But as it says in that article, sometimes you want to save the packaging, if it's really nice. But wanting to save the packaging and wanting to keep the figure MOC aren't the same things, so if you're careful, you can hold onto the cool cards without having to buy doubles or give up playing with the toys when you want to.

Oh, and P.S.: if you're wondering how the packaging looks when you've put the figure back in and closed it, go check out the "MOC" shot at the top of the Cobra Commander review - it was the last one we took...

This entry was posted in addendums, commentary and tagged GI Joe. Bookmark the permalink.

1 Response to How to keep toys on their cards while still playing with them.