Rustin's Spoils of the Week #19

Traveling for work this week, hence the stellar hotel-bathroom backdrops. While it sucks to be away from home it at least affords the opportunity to hunt on some new ground, and indeed that has paid off in spades. Not only did the local Walmarts have Green Lantern Classics (for the "more-reasonable-than-what-TRU-charges" price of $15) but multiple sets of DCUC 14, the impossible-to-find (in Chicago) Walmart exclusive series! 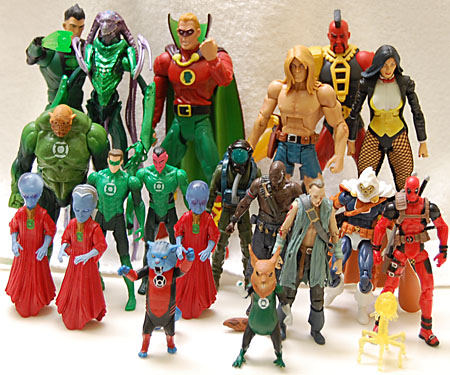 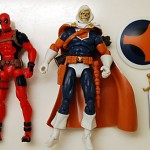 To paraphrase the opening line of Nickelodeon's defunct sketch comedy show All That, "Fresh out da box!" Isn't awesome finding toys that are so new you haven't seen reports online of them showing up yet? That was at least the case when I came across them. The new Deadpool is just super cool, but come on - you'd have to work hard to screw up a Deadpool figure (looking at you DST...). Taskmaster is likewise pretty cool and loaded with accessories! The volume of weapons in this set alone go beyond what we usually see across an entire wave of the single card figures. I don't really understand why these were released as a two pack rather than as two singles, but since I now own them, I don't care - sorry. The only problem with this set is Taskmaster face paint, which is rough at best. I sucked it up and purchased anyway, who knows when/if I'll ever see this set again. 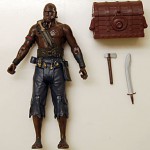 At last wave 2 is out and my disgusting need to buy PotC figures can be satiated. This guy is just as decent as the 6" Build-a-Figure. Comes with the sword and axe, as well, and both can connect to his belt. Just a standard 4" figure of about average, or slightly-better-than, quality. 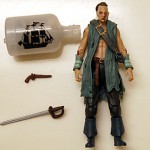 Having now seen On Stranger Tides and being totally flabbergasted at how pointless the zombies were, I don't care if they make any more. I'm pretty much done with this line. QARZ is pretty cool though and probably my favorite of the 4" figures. Good sculpt and nice color palette. The prototype and package photography shows his vest and wristbands are tan or brown but the teal-ish hue in release is better both in overall aesthetic and in movie-accuracy. 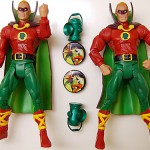 Great figure but ridiculous head - why is Alan so angry? Just a remarkably odd choice. His lantern also looks different from the designs I'm used to seeing but still is pretty cool. No constructs for him, though one would have been cool seeing as his constructs are more fiery in nature the those of the Corps. And of course I did have to get two - one for modern JSA and one for Golden Age JSA. 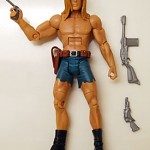 One of an increasing number of characters I've never heard of until Mattel makes a figure of him. At least this was a Kirby character. He's definitely way on the "silly" end of the spectrum, but the plethora of ray guns are neat and he'd look fine in a "DC Various" display, if they ever get around to more not-quite-in-the-standard-continuity-realm of characters. 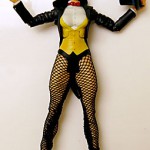 What can I say but that the "real" fishnet stalkings were a horrible idea. A really nice sculpt, and I like that her top hat is wearable and holdable, but good gosh are those stalking seams horrendous. I'd 1000% have preferred legs with the cross-stitch sculpted in, cast in dark baj while a black wash to fill in the netting. 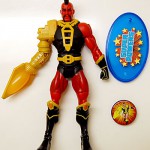 The almost-last of the Super Powers and I'll be damned if they didn't do it again, making a terrible design a cool toy. There's only one problem with the figure (well... once you get past the design [i.e. speedos and mohawk]) and the the cyborg arm shoulder... as has been thoroughly addressed elsewhere it desperately needs a balljoint, but the blockiness of the sculpt means its basically just a swivel cut. So incredibly avoidable and so thoroughly figure-ruining. On the upside though, the translucent spike/cone is pretty cool! 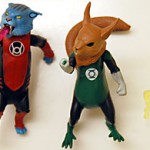 The idea of this set is cool but it really, really seems a ripoff when purchased. Three pack-ins do not equals a $15+ value, even if they are all unique sculpts. A fourth character is really wanted here to help feel not ripped off. Bzzd would be awesome or a C'hp could have been done to capitalize on the B'dg sculpt, just give him a new head. Despotelis is a really cool idea, but now both DCD and Mattel have made him way oversized for the bacteria he is. I get why, but any size smaller would have been better - and if you have the DCD one, it's way, way better than this. 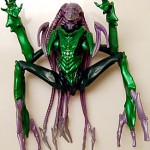 The Green Lantern movie "preview" figure whose silhouette had us guessing everything from Parallax to ???. It's a good figure and I'm sure will look great mixed in with the other movie figures. He/it has limited articulation with angled swivels at the knees and elbows. Character-accurate or not this gives him a crab-ish look and posed that way which is kinda cool considering his design, but alas he cannot rightly go on all fours. 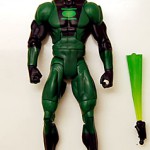 I'm really surprised it took this long to get a Sodam Yat figure! A generic body, new head, cool costume, a B-Level role in the GL-iverse of late means he's an obvious choice. Mattel beat DCD to the punch and this is another solid Mattel effort. Decent paint apps and a head with a slightly more-than-usual cartoon-ish aesthetic to the head. Sodam's real "claim to fame" is his Lantern Symbol construct projection, which is part of his hand sculpt, not a clip-on. I like that idea more than the clip-on stuff in that it's more accurate, however it is an odd construct to have. He comes with interchangeable hands so you can have with or without construct, and while it's a neat piece, when I go to display it'll definitely be without. I would have preferred a balljointed wrist to the swappable hands and construct but maybe that's just me. This is a character/figure than really could have benefited from the "super articulation" seen in Series 1. All Lanterns really need double-jointed elbows and balljointed wrists. 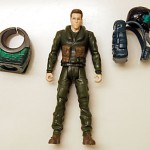 I've been fighting the urge to get one of the 4" figures for a couple weeks, mainly because I want the Guardians from the Walmart two-packs, but this is one figure I'm sure won't pop up in the two-packs so I'm safe to buy away. Yes, he's as underwhelming as he looks, but the vest and helmet are kinda neat. He's a decent addition to the collection considering he is most likely the only non-GL-uniform character in the 4" line. Plus, he gets me the ring! Except... the ring is designed for children and no one else. Despite the translucent green portion is huge, the actual silver, finger part is so narrow it can only fit on my pinky. Hopefully they'll do a new silver piece with a wider circumference, for fat kids and adults, later down the road. 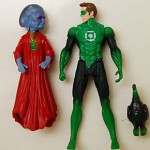 This line is a "look but don't touch" toyline, by which I mean they individually unique sculpts and simple use of color looks nice, but when you try to play with or pose them you realize these are cut-rate figures. Cheap plastic, super limited articulation there's just not much you can do with them. I understand they're "targeted for kids" but I suppose that means only kids who don't like to have fun. At least they do have balljointed shoulders, but beyond that its just T-crotch and swivel neck & waist. The single carded figures are $7 and Walmart has them right next the Captain America figures. Those are $8 and you get three times the articulation, paint and fun. I'd rather pay that extra dollar and see some part re-use on GL. At least these three packs come with an accessory, though its the lantern battery. 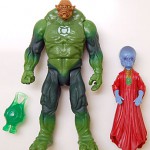 I have never been a fan of "each lantern has a unique outfit" because you know what - uniforms are supposed to be uniform! I can accept and bear with that conceit though, but at least have some consistency - it really bugs me that Kilowog doesn't have the "shiny" colors that the rest of the Corps have. On the upside though, the rhino-like styling of his body is pretty cool. All of the Guardians are identical from the neck down, which is a bummer because we see in the movie photo on the package that Ranakar wears a different outfit than the two girls. At least they could have sprung for two bodies, one for the girls and one for the boys, but I guess we're just stuck with all the Guardians dressed as women. 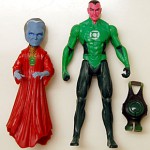 Sinestro, oh how I love you but boy do I not know what to make of your movie incarnation. I'm confident that Mark Strong can deliver the "best to worst" transition if there are more films and have my fingers crossed that the writing can support it. I'm just not crazy about the overall aesthetic and production designs of this film. But nothing I can do about that now. I really like the translucency of the Guardians' heads but am a little confused about how it "works" biologically. It would be neat to get a Movie Master two-pack but I'm doubting that'll happen. The forearms/hands are separate sculpts but are just glued into place. That's two more chances of articulation passed up.

7 Responses to Rustin's Spoils of the Week #19