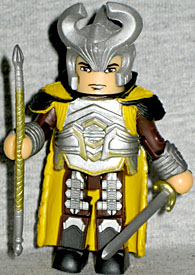 Asgard safe. Their tireless efforts on Odin's behalf have kept the peace within the boundaries of Asgard and beyond for generations. And now as a new threat to peace looms, they are once again called upon to protect the shining realm!

The Asgardian Guards (or "Asguards," as we call them) appeared briefly in the original Thor trailer that debuted during this year's Super Bowl, stalking grimly through the halls of Asgard. Like Rustin reported, his ridiculously ornate armor and cape are one sculpted piece. His gauntlets and that wild helmet are new sculpts as well, and overall the look is undeniably "Kirby-ish." Say what you will, the guy had a great eye for outlandish, unearthly costumes. The armor on his legs is just painted, but it blends in fairly well. The Guard has two weapons: a new gold and silver spear, and a copy of Swordsman's blade.

After his exile from Asgard, Thor finds himself alone and stranded 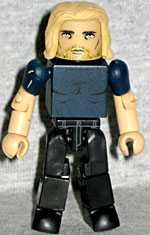 on Earth. Befriended by the mortal woman, Jane Foster, the thunder god must redeem himself before his father Odin before he will be allowed to return to his homeworld. With Jane's help, Thor will need to see the errors of his youth and become the hero he was meant to become!

This figure is called "Civilian Thor" on he packaging, but was known as "Don Blake" on the original design sheets. It's basically just a guy in a T-shirt and jeans, which suits my love of "plain" figures. The face has a few minor differences from the "real" Thor figure, though he does share the same hair. The set I got at the store (this is a TRU exclusive, by the way) has some stray fleshtone 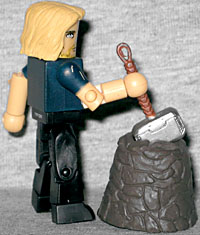 paint on the one sleeve, but that just makes it look like there are small tears in the shirt, so I don't mind. It's battle damage!

The real selling point of this set is Thor's accessory. He has the same hammer as the normal release, but he's also got a film-accurate pillar of dirt to rest the hammer on. The rock stump base is 1" tall, and the hammer fits in a perfectly shapped notch on the top. This is a really fun accessory, and pushes Civilian Thor from the realm of "okay, but only of high interest to a few people" to "awesome representation of what you'll see on-screen."

The Asgardian Guard is available in the single-boxed counter dump, but this Thor is available nowhere else - and there's certainly no other way to get his mound of dirt! Without the dirt, I probably wouldn't even have bought this, no matter how much I enjoy civilian toys.