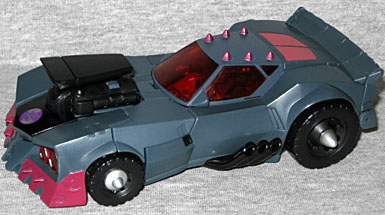 is an art form to Wildrider. He is always brainstorming bigger, badder, louder, and more dangerous looking stunts, and he's got the processing power to coordinate them flawlessly. The Stunticons execute them without a scorchmark, but woe to anyone behind them. Now that he's got a phlogiston-reactor flamethrower and a chaos-crystal-edged chainsaw in both robot and vehicle modes, there's lots of new carnage to spread around!

Now that's an interesting change. In G1, Wildrider was a complete psychopath, smashing into things on purpose - now he's a brilliant director? Hey, whatever works. And speaking of changes, here's some interesting trivia for you: when the BotCon folks took the Stunticon ideas to Derrick J. Wyatt for approval, Breakdown and Wildrider's molds were reversed; Wildrider would 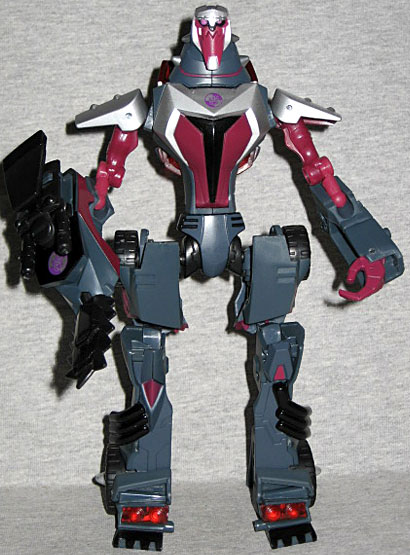 have been the repainted Rodimus, and Breakdown would have been the Lockdown. It was Wyatt's suggestion to switch the two, and that's the toy we have today.

One question remains, however: if the point of "Project Stunticon" was to put Decepticon sparks in Autobot shells (as revealed in Toxitron's bio), why is Lockdown one of those bodies? He's an auto, but he's not an Autobot. He's a bounty hunter! He works for the Decepticons all the time. Wouldn't seeing his body-type make everyone suspicious? Eh, the paint definitely makes a difference. He's grey with black and maroon highlights, rather than black, red and green, so he looks less overtly evil. Still sinister, though. Robot mode adds a lot of silver, which is only present on the car in the hubcaps. Interestingly, if you compare Wildrider to Lockdown, the biceps are switched. It's hard to tell, because Wildrider doesn't have the extra colors on the asymmetrical sculpt, but the arms are definitely swapped left to right. Wildrider gets the chainsaw weapon from Blazing Lockdown, which can be removed from the hood, but can't flip back out of the way.

Wildrider's new head was designed by Derrick Wyatt, and it looks absolutely maniacal. He has a saw-toothed underbite, wildly uneven eyes, and a metal plate bolted to his forehead. The character is dramatic and pompous, and was voiced by Neil Ross, who basically did his Harvey Birdman Vulturo voice. Without the mumbling.