Fisitron is an overly enthusiastic maker 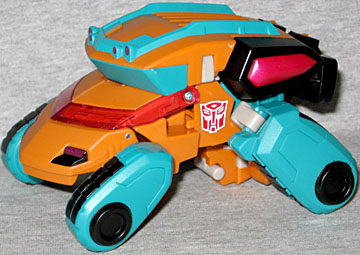 of tools, and the genius behind some of the most effective weapons in the Autobots' arsenal. In his cozy lab he makes whatever comes to mind. For each strange gizmo he dreams up, he also manages to develop devices that can turn an Autobot into a one-bot wrecking crew. He always keeps a pair of nucleon shock gauntlets handy. Although Fisitron created Optimus Prime's laser axe, it is often credited to his rival Skyfall.

Fisitron is the Animated version of G1 character called Ironfist - they can't use the name for obvious reasons. He was a completely 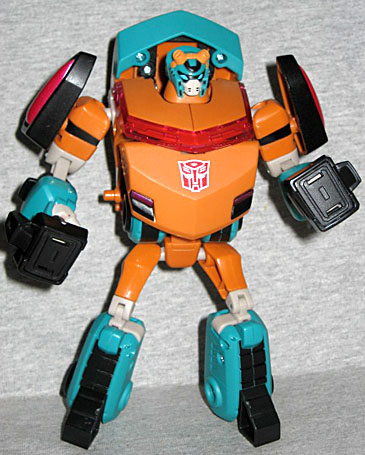 forgotten character until 2010, when both IDW and the Collector's Club decided independently to use him in their stories. IDW portrayed him as an obsessive fanboy, so of course now he's a favorite of the real obsessive fanboys.

G1 Ironfist turned into a beige Humvee (which was still an exotic vehicle in 1993), so you might have expected him to use Swindle's body, but he's still on Cybertron, not Earth, so he needs a Cybertronian mode. He gets his mold from Ratchet and Ironhide, but he's been painted a rather garrish orange and teal, with hot pink on his shoulders. Even the windshield has been molded from pink plastic! It's almost as bad as a Generation 2 colorscheme, but in its own weird way, it's true to the original: beige becomes orange, green and blue become teal, and... well, the hot pink is pretty much unchanged.

Fisitron gets a new head, of course. The G1 toy had a head that was like a round, chubby version of Soundwave's, and there's a little bit of that here, but it's much more of a new design, closer to the art in the IDW comics. He's got a vented mouthplate, and two bumps on his head that are painted to look like a pair of goggles pushed up off his face - since he's a builder, that would make sense.

Fisitron was the BotCon 2011 Giveaway figure: people who bought the Primus Package (the most expensive attendance package) got a free bonus figure that wasn't given to non-attendees; see, you can order the box set even if you're not going to be at the show, but you won't get the bonus figure. Since only the hardest of hardcore Transfans will physically be in the convention center, it makes sense to make the giveaway a character who will appeal only to them.