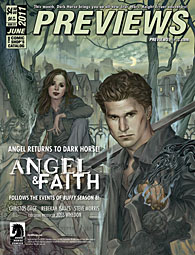 Amazingly, DC Direct has nothing listed this month, so the first listing of interest are all IDW's GI Joe books. They start on page 142 and continue through 144. That's also where the Transformers comics start, and they continue on the next page.

Next we jump way to the back. It's not exactly toy-related, but there's a really cool Gozilla T-shirt on page 354 that Poe would probably love. And on page 362, a MotU "Battle of Hordak" shirt, too. Along with a classic Skeletor. On page 363, there's a shirt with a big Thundercats group shot.

The Femme Fatales Medusa statue on page 373 raises an important question: does DST know what "Medusa" is?

The Minimate Carrying Case must have done well, because there's a second on the way. This one will have an exclusive Pirate Minimate.

DCUC 18 is listed on page 378 at stupidly high prices. On the same page, we find out that Green Lantern Movie Masters Series 3 will include Krona and Unmasked Hal Jordan.

Page 379 is the place to look at DC Mez-Itz: 6" Superman and Darkseid, and 2" Dr. Fate/Etrigan, Flash/Captain Cold and Batman Beyond/Cyborg. Cyborg? What happened to the Blight shown at Toy Fair?

Amok Time's Return of the Living Dead Tarman Zombie is listed on page 384. Didn't that come out years ago?

The new Marvel Universe toys are next. The Team Packs are on page 384, and the Sentinel is on page 385.

NECA's new Nightmare on Elm Street toys are listed on 385, right next to a re-release of a few Harry Potter toys. And on page 386, Robocop!

It's nearly Christmas, so the yearly shipments of the Rudolph the Red-Nosed Reindeer toys is upon us. See page 390.

Ready for a deluge of Star Wars toys? They start on page 391 and continue to 393.

And hey, on pages 394 and 395, you can see all sorts of new Transformers toys. Will they ever be released? Only if you're lucky!