In today's review of the SDCC-exclusive MotU Classics Queen Marlena, I told you there are two packaging variations. Here's the packaging my figure came in: 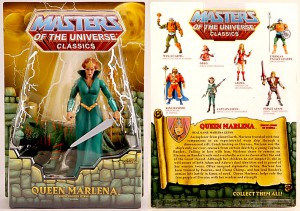 Very nice, isn't it? Now, that version was only available at SDCC - the one sold via Mattel's website changes up the outfit, and packages her as Captain Glenn. 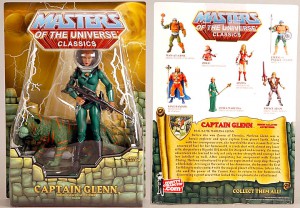 It even gets a unique bio on the back:

Before she was Queen of Eternia, Marlena Glenn was a heroic explorer and space captain from Planet Earth. Along with her courageous crew, she traveled the stars in search of new sources of fuel for her homeworld. A crack shot with almost any laser rifle, she prefers a Higuchi 1114 model for its speed and accuracy. On many adventures, she learned to rely on not only her strength and courage but her intellect as well. After completing her assignment with Project Photog, Marlena volunteered to pilot an experimental Warp Ship through a black hole. Arriving in the center of her dimension, she became the first Earthling to make contact with the magical planet of Eternia. Late in life, she used the power of the Cosmic Key to return to her homeworld, discovering a great secret that linked the two planets she called home!

Project Photog, eh? Interesting! And I wonder what the "great secret" is? We'll probably find out later.

Notice, too, that the cross-sell art at the top of each card shows only members of the royal family and those who would be around them the most: Man-At-Arms, Orko, Adora, Palace Guards, Randor and Prince Adam. And cleverly, see how each card, for Queen Marlena and Captain Glenn, shows the other version as a cross-sell? That's cute!

This entry was posted in addendums, Mattel, SDCC and tagged MotU, SDCC 2011. Bookmark the permalink.