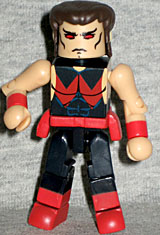 of his company. He was approached by Baron Zemo and given super powers so he could infiltrate the Avengers and destroy them from within. We've reviewed a Wonder Man Minimate in the past, but that one came out after this one - Minimates Series 16 came out in 2007, while Series 2 of the TRU Minimates didn't come out until 2009. Wondy is wearing his best costume: the one that first appeared in 1985's Avengers #253 and he wore (off and on, with slight variations) until 1993. It's a black tanktop with a big red W on the chest and back, red boots and wristbands, and black pants. Surprisingly, there are muscles painted even on the black areas, where they'll never be seen - dedication! His belt is a new mold, with the flight pods on the hips, and he uses Juggernaut's hair. 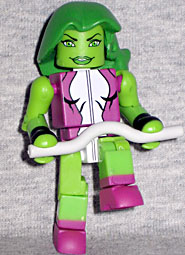 As far as I can tell, Wonder Man and She-Hulk were never on the Avengers at the same time. Sure, they appeared together in those "let's bring together everybody" stories, but as far as being on the same roster? Nope! She-Hulk actually looks pretty great in Minimate form - the green chosen for her skin contrasts very nicely with the magenta-ish purple of her costume. Plus, the white panel in the center of her jumpsuit looks good in the Minimates' cartoonish style. The stripe continues up over her neck and all the way down her back, so there's no skimping on paint apps here! Her hairpiece originally came from Ultimate Storm, but she still gets a new accessory: a bent piece of pipe. It's too thick to comfortably fit in her hands, but is there really anything else that would have suited her?

Wonder Man and She-Hulk don't really have much of a connection in the comics (which is weird, considering how much both of them like to date), so there was no reason to package them together here other than "everybody else is already paired up." Still, who cares why they're put in the same box together? They're both well-designed Minimates.