Rustin's Spoils of the Week #28

Of course I can't control my collecting impulse so not all purchases on my trip back to California for SDCC 2011 were from the Convention. Thus I unfurl for you the handful of baubles I assumed ownership of surrounding that mighty banquet of Collectibles. 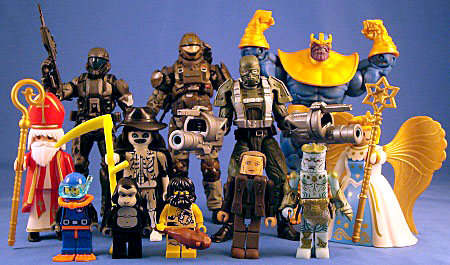 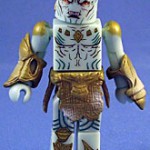 The Minimate Single packs that DST does are usually the most painful part of collecting the brand. See, Minimates has a fairly focused and niche market, which subsequently means that competition will be high, so shortpacks are always felt hard by all and the traditional one-per-case characters become impossible to find, especially since they tend to be a significant characters fans want. Thor had an odd mix and included two specific characters beyond just the armybuilders, once of which is Laufey - King of the Frost Giants (as portrayed by the awesome Colm Feore). While each of the Frost Giants were different and unique there is little to really single out Laufey amongst them. He could or should have had a more pronounced Crown, or cape, or some other more unique feature beyond just dialog. As a result he doesn't really stand out amongst his minions, but that is something outside of DST's control and this is a fine execution of the character for what he is. Though I would have preferred him to have him feature the familiar torso and feet height extenders seeing as he is a "giant." 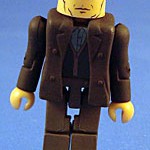 The last two times DST did single cases (that I cared about) I scored the rare character by buying a case (Iron Man 2) and by stalking their SDCC booth (Terminator 2), so I was hoping that the latter would get me my Selvig and Laufey. However all they ever had were Frost Giants and the occasional Asgardian Gaurd (AsGaurd?), so hopefully this helped to drive home how painful the chase figures are. It took a chance perusal of a Santa Monica store to stumble upon these missing links. Selvig is another "good for what he is" Minimate, successfully capturing the "just a guy in clothes" character. The only real complaint would be that I can't see Stellan Skarsgard anywhere in that likeness, so in a way this is just a generic Old Guy 'mate. Beat-Fodder for the MAX cops if you can ever find him. 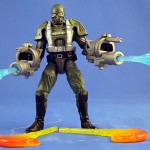 Ten Dollars at Target - now that's more like it! TRU may be awesome at getting great product out to collectors, but they are dangerously slipping back down that price-gouging slope that almost sent them to bankruptcy less than a decade ago. After seeing the movie, this is a much more enjoyable figure and I really appreciate the blue plasma bolts now too. If only we had a Movie-Style Bucky... 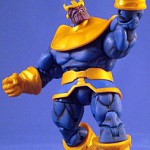 I do like the big guys! Not only are they cool looking but they really help justify the price point. Sadly, mine has pretty splotchy paint work, but I got him for standard SRP which is good enough for me, since I've not seen him at retail before and he was $20 at the least around SDCC. Now how was that for a sentence!? I was mildly impressed to see he comes with interchangeable left hands for with and without Infinity Gauntlet look. Pretty cool! 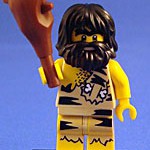 A friend of mine scored a couple cases of Series 1 in pursuit of Zombies (to no avail, so we are both yet desperately in search of the Undead) so I was able to fill in a few gaps. I dug the novelty of the Caveman from day one but the inclusion of a Cavewoman in Series 5 makes him a must-have. He's a simple but fun addition, with properly matted hair/beard and a full unibrow. Then of course there is the wife-huntin' club which will come handy once Series 5 is out. 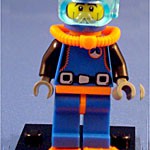 I generally love anything underwater themed, and I really like the color combination they went with here. I kinda wish the next wave of the Atlantis series would take a more realistic, or at least more diver-y approach as scene here. The only down side is that the flippers don't connect to any of the Lego pegs. 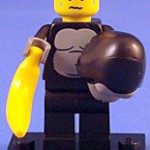 Another figure that was neat but became a must-have upon the reveal of Series 5. This doubles as both a decent Gorilla mini-fig and a fun "Guy in a Monkey Suit" character for all kinds of hijinks. The mask is a simple but good sculpt, complete with eye-holes cut out and a very sweaty face underneath. He even has a zipper painted on this back. Included is the standard black base and a lovely banana. Upon the release of Series 5 you better darn well believe I'll be building a micro-scale city block for this guy and the upcoming Lizard-Costume-Guy to have an epic Man-In-Suit battle in! 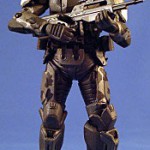 This is "the one that got away," the first ODST trooper which I never picked up on first release. It's nice to look back a few years and see how the articulation has changed over the waves and lines. Another fine ODST for the shelf but nothing particularly amazing or remarkable. He does lack the little hexagonal dog-tag, or whatever it was, that came with the original release. Oh, and this line is $2 less than Halo: Reach, so that's nice too. 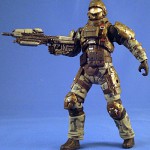 I am a full-on sucker for Troops and Army Builders, which is why I keep buying these terrible Marine figures. How many releases will it take until we get bicep articulation???? These guys can not hold their guns! He's the same body as the the two-pack figures, the twist being armor coloration and the transparent visor allowing you to see his eyes. That simple little feature on the helmet was the deal breaker for me pushing me over the edge into purchasing. Were only that he had bicep articulation I would probably army-build this guy, but seeing as there is so little one can do with him pose-wise, one will be enough. 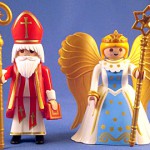 This is the one Santa set I never saw at retail, and my guess is that its a little too religious for Mass Market. The Angel is surprisingly cool, with the wings being soft PVC and are slightly articulated the pegs they clip on to on her back. Kris is pretty great, with a bunch of new parts and a very unique look in the world of Santas, and lets face it, I got this set 100% for him. Why? Playmobil Pope, suckas!!! 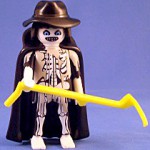 Cashing in on the big success of Lego's blind-bagged Mini-Figure single packs, Playmobil follows suit with not one but two waves per series - one for boys and one for girls. To make things even more blatant, the figure comes completely disassembled, a first for Playmobil. As always I loathe blind boxing, but it does appear these have a numerical code printed on the back to help differentiate. Not having access to a decoder I had to feel my way through the box hunting for the one figure in Series 1 I right desired - the Grim flippin' Reaper. He's a fairly traditional skeleton paint job, with the semi-hooded cloak, but comes with a scythe and flat-brimmed hat and a uniquely creepy painted mouth. The hat and cloak combine to make this a somewhat timeless interpretation and kind of gives him a Horror Movie vibe. The Scythe is day-glo yellow which nearly ruins the figure were it not for the simple fact that it's an official Playmobil figure of Death.

15 Responses to Rustin's Spoils of the Week #28