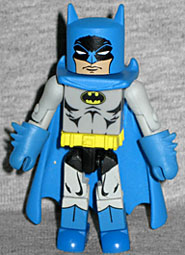 In Minimates, just as in every other toyline ever, having the license for DC Comics characters means one thing above all others: too many Batmen. Even ignoring the many, many Batmen in the C3 sets, this is the third Batman in the DC Minimates line - an average of one Batman every other series. This one is a Silver Age version, wearing light gray and bright blue, with a shadow on his forehead and a yellow circle around his chest. Surprisingly, while the cape and gloves are the same pieces the previous Batmen wore, his ulitity belt and mask are a new molds, used only this once: the ears on the mask are pointier and more toward the center of the head, and the belt has a distinct buckle. The muscles on his chest and legs are painted simply, but they work.

It's kind of ridiculous that the figure doesn't include a batarang, but at least he has a removable mask. So that you don't have to worry about lining up the Minimate's face with holes in the hood, there's a face painted on the head cap, too. When you take it off, there's a new black hair piece to turn him into Bruce Wayne. Or at least into "casual Batman." 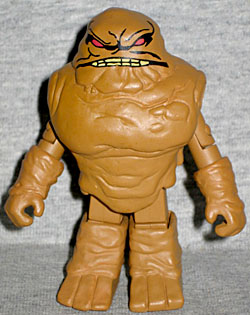 Batman's foe in this set is Clayface, and he caused a bit of controversy back when he was revealed. You know how Rustin is always talking about the balance between painted details and sculpted parts on a Minimate? Well, Clyface is almost entirely sculpted parts. These days we're used to that, with figures like Mr. Stay-Puft, but Clayface was the first to do it and people got their panties in a twist. The core of the figure is a 2½" Minimate body, but the feet, forearms and head/torso covering are all new pieces added onto the body. The pieces have a very good asymmetrical sculpt, all goopy and mud-like without looking like sculpted clay, which had to be tough to accomplish. The face is just painted on; there are no sculpted elements to it.

The Batman in this set is entirely unnecessary if you have any of the previous versions, but taken objectively, he's perfectly fine. Don't have a Minimate Batman? This one's great. Clayface is done well, even if he is made of a lot of new pieces - and everybody loves Bat-villains.