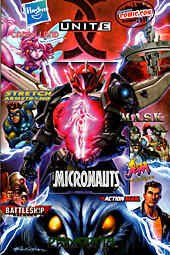 This weekend was the New York Comic-Con, and the OAFEnet street team was there. Taking pictures, attending panels, buying exclusives, knocking over companies' displays (sorry about that, Robert Yee: though in our defense, the plastic around those shelves was wicked flimsy).

Anyway, one of the exclusives was most unexpected: a comicbook from Hasbro. Yeah, not IDW, Hasbro itself (though it does use a lot of IDW's talent, and was put together by former IDW editor Andy Schmidt). Back in August, Hasbro applied for a new trademark called "UNIT:E" - and now we know what it actually is.

The story seems to be an amalgam of a bunch of different Hasbro properties, and most of them have been heavily redesigned. Everybody loves a grim and gritty update, right? For instance, check out the new take on venerable old MASK, with art by Nick Runge: 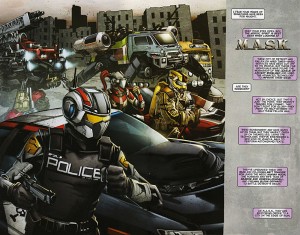 We don't know who Nick Runge is, but that's pretty dang cool, isn't it? And if you don't like that, here's Peter Nguyen with a little something for the ladies: 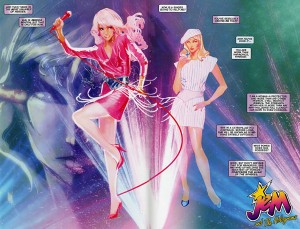 Or how about Candyland's Princess Lolly as a Magical Girl? 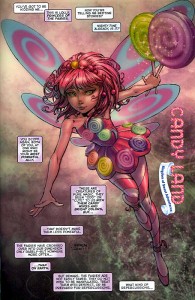 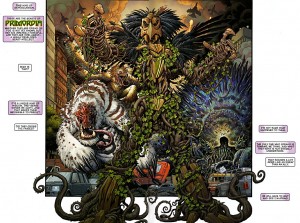 Primordia? That's a trademark Hasbro applied for back in March (for toys, comicbooks and videogames), but this is the first time we've seen anything of it. This comic has just seen the world premiere of an unrevealed toy!

There are other properties in the book, but we'll leave you to discover what those are on your own - and also who the mysterious narrator is. In the back, there's a letter from Andy Schmidt:

What you've just read (and hopefully enjoyed) is our little love letter to the varied brands that Hasbro has had the pleasure of ushering into the world. This book is not meant as the ultimate brand expression for any one of these characters or groups of characters.

These characters worked their way into our hearts. Hasbro is a big place with a lot of personalities. Here in HasLab, it's our job to look at things a little differently, and we love these characters and groups as much as you do. We're just having a great time producing a magazine that we hope you've enjoyed as much as we have.

We don't want to post the whole thing, in case Hasbro decides to sell the comic again later, but it's certainly fun to see how the characters are reimagined.

This entry was posted in comics, Hasbro and tagged Jem, M.A.S.K., UNIT:E. Bookmark the permalink.