The back-of-the-card bio for today's Gothitropolis Scarabus review was way too long to include in the actual review itself, but what do we have a blog for if not a place to publish extra information? Here's the whole thing: 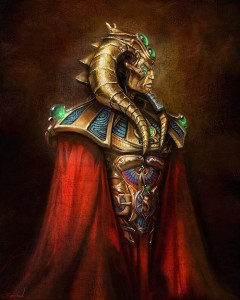 The day that the demon Scarabus first set foot on our earthly plane is unknown, but the earliest recorded stories of his influence were written around 3000 BC in ancient Egypt. As legend has it, demons must shed their physical form when crossing over into our world, only to be reborn from the lifeless shell of the recently departed. Reborn from the body of his eventual namesake - a scarab beetle - Scarabus bares [sic] little resemblance to the that granted him new life. Combined with his own hellish visage of horns, hooves, and a forked tail - glistening golden skin and dangerous pincers sprouting from his back are all that remain of the creature that bore him. He is a devastatingly powerful creature able to resurrect the dead, only to transform these sad creatures into his own unholy soldiers. Amassing legions of the undead for millennia, the demon lord has been building an army for some unseen sinister purpose. An integral part of this dark congregation, Scarabus' maniacally malevolent Timekeepers use their Chrono-hammers to open portals that allow him the ability to vanish and rematerialize at will. It is also rumored that the symbols that adorn his armor (later adopted by the Egyptians as the eye of Horus) represent Scarabus' ability to gaze into men's souls.

The foul beast, who has also been called Scarabagoth in some texts, has been both worshipped and loathed. He has lurked in the shadows for centuries, shrouded in mystery, with only his closest of acolytes knowing his true purpose. One thing is for certain to the rest of us - Scarabus is a dark force that may well usher in the end of days. --Book of Atellus Chapter 12