Gareb Shamus vs. The Gutters

Let me start this post with one word: "allegedly."

Because if this story is true, then Gareb Shamus, former head of the Wizard empire, is a small, petty man who will gladly use his withered connections to other industries to try to cut the legs out from under anyone who annoys him even slightly. We can't verify this story - we can only report what we've pieced together from the available evidence. So this is merely an allegation of what happened, not a statement of objective fact:

Gareb Shamus tried to get an artist fired from his day job because he drew an unflattering comic. 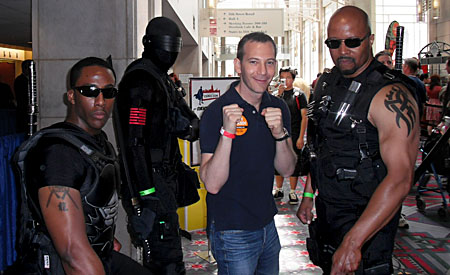 The Gutters is a webcomic that updates three times a week and pokes fun at the comic industry. Not every comic is a winner (and it falls into a lot of the same silly pitfalls as any fanboy argument), but it's funny enough to be worth following. Today's strip is making fun of the idea of a MacGuyver comic. But the text below the comic is a story of some (unspecified) industry professional:

I need to speak out about something, making one issue very clear, before I get on about today's page.

Every single Gutters page is attributed to me as the writer, meaning I am responsible for every panel on every page.

The artist of the page, as well as the team behind Gutters, are all on a work for hire basis. In layman's terms, we pay them to draw, letter, color and edit my script, they do so.

Should you find yourself the subject matter of a Gutters page, and take offense to it, don't go after my artists. Should you be so offended that you attempt to get someone fired from their day job, don't be a coward.

My e-mail is Sohmer@blindferret.com, I will gladly provide you with my contact information, as well as that of our legal department.

I take sole responsibility for every comic and news post on this site.

Don't you dare go after one of my artists.

I'm a much better target.

That said, should an artist request that I remove a page, I will do so in a heartbeat in such a situation. Of course, I reserve the right to have the page redrawn at my leisure.

Huh. That's interesting. And it certainly leaves you to wonder what's going on, doesn't it? Well, if you scroll back to last week's comics, you'll notice that this strip looks different today than it did when it was posted. 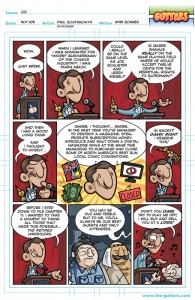 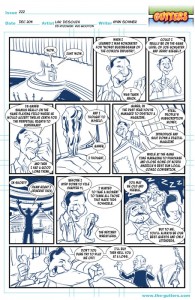 It's interesting to compare the two and see what changed. And it's not just a question of the adjusted layout: for instance, in the original version our cheery businessman seems to be accepting an "Asshat Award" - in the new one, it's the "Head Up Your Own Ass Award": 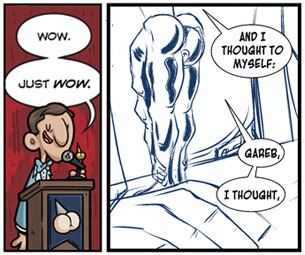 Additionally, the redone strip no longer has any credit for the artist (though the title of the page makes it clear that it was drawn by someone named Lar Desouza). The original page had the following credit:

Paul Southworth is a cartoonist, writer and graphic designer who has been publishing on the web since 1999. He is perhaps best known for his webcomic "Ugly Hill," and has recently co-created on a comic strip about the software industry called "Not Invented Here" with Bill Barnes (of the webcomic "Unshelved"). Paul works as a graphic designer at Hasbro, Inc. and lives in Warren, RI with his wife, two sons, a dog, and a cat.

It's that "Hasbro" mention that's particularly interesting to us: Sohmer's angry rant makes it clear that Gareb tried to get Southworth fired from Hasbro; he must have still had some nebulous connections to the company from when he published ToyFare, and tried to flex that (puny, atrophied) muscle. Though you really have to wonder why Gareb thought a huge multinational corporation would risk a wrongful termination suit to appease someone who put his name on the masthead of a now-defunct magazine written and edited by other people - a magazine Hasbro used to advertise in - just because one of their artists drew a picture on his free time. Looks like someone was grossly overestimating his own importance, and deserves all the public embarrassment he can get.

We've written before about the Streisand Effect: when an attempt to censor information only serves to bring more attention to it. Gareb wanted to hide this strip, and even tried to make a father of two lose his job because of it. Because of that, everybody should see this comic - both versions of it.

This entry was posted in comics, commentary, Hasbro and tagged ToyFare. Bookmark the permalink.

4 Responses to Gareb Shamus vs. The Gutters