That is the tale of Skippy the Jedi Droid, which first appeared in Comic Buyers Guide #1219 (March 28, 1997), and was adapted to comic form for Star Wars Tales #1 two years later. Let's see how the video compares to the original: 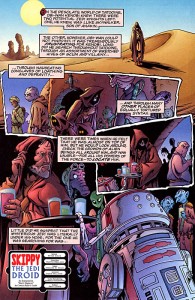 Hey look, the art is by Martin Egeland! You may remember him as the artist who rose to prominence drawing Peter David's Aquaman, before being replaced by Jim Calafiore (thus starting Calafiore's reputation as "that guy who takes over books after good artists leave" [cf. Exiles, Secret Six]). 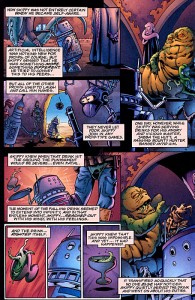 Ha! Check out the cameos by Bender B. Rodriguez, Tom Servo, and Croooow! And those are definitely Boba Fett's legs, because what good is a Star Wars story if it doesn't have Boba Fett in it? And coming up, Robot B-9 from Lost in Space: 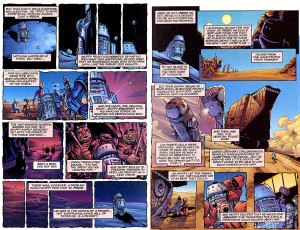 That's really nice work by the colorist! You've got shifting hues to show the passage of time, different lighting conditions inside and outside... good stuff. 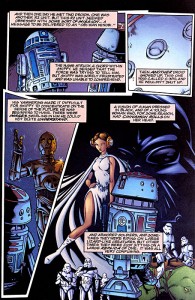 Ah, now you see what the video was going for with the giant Darth Vader figure! This page is also an example of Peter David's tendency to go for the easy joke: yes, Leia's hair looks like cinnamon buns; and yes, everybody already made that observation when they were 7. Cutting edge! 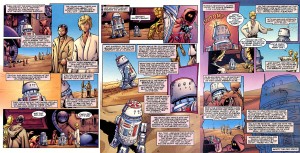 And now you know the true story of what happened in Episode IV! If you can't track down a copy of the issue, "Skippy the Jedi Droid" (and many other stories) can be found in Star Wars Tales, Vol. 1. Check it out!

This entry was posted in comics, fan films and tagged Star Wars. Bookmark the permalink.

4 Responses to Skippy the Jedi Droid