In today's review of the "Steel Mill" T-1000, yo proved that he didn't know how many different disguises the liquid metal Terminator took during the course of the movie, so let's set him straight:

First we have John's foster mother, Janelle Voight. The T-1000 can't duplicate any weapon more complicated than a sharp stick, but it can get all that frizzy hair? Yeah, right. Janelle was played by Jenette Goldstein, who you'll also remember as Pvt. Vasquez in Aliens. Fun fact: remember this line from Aliens? "Somebody said 'alien' she thought they said 'illegal alien' and signed up!" It's a joke based on her audition. The film was casting in London, but looking for American actors. Goldstein didn't realize the role was for a sequel to Alien, so while everyone else showed up to the audition in military gear, she was dressed like a cholo. A female cholo. So a chola, I guess.

Here we have the unnamed security guard from Pescadero State Hospital. They're played by notable late '80s/early '90s twins Dan and Don Stanton. They've appeared in a few movies, always together in roles that called for people to look comically alike.

And hey, speaking of which, here's the T-1000 mimicking Sarah Connor. Boy, that James Cameron sure is a master of special effects, isn't he? Camera tricks, digital wizardry, all that. The second Sarah must be part of a composite shot, or a complicated prop built by Stan Winston, right? Nope. James Cameron wants to put one person in two places, he hires two people who look alike. That's Leslie Hamilton Gearren, Linda Hamilton's twin sister.

The Terminator's only other disguise wasn't a person at all - it was this floor. If it can hide as scenery, why did it need to turn into a person in the first place?

Anyway, those are all the non-Robert Patrick things the T-1000 turned into. Not really that many, honestly, but it was certainly enough to be impressive.

Now, before we leave you, here's one last image: the deleted scene that inspired the figure's unique boot sculpts: 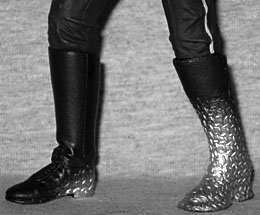 This entry was posted in addendums, NECA and tagged Terminator. Bookmark the permalink.