Four months - this has to be some sort of record for the longest period of time between writing a review and posting an addendum for it. There's a piece of information we left out of the Wreck-Gar review back in August, and now we can finally share it with you:

If you get two Junkions (either Wreck-Gar or his repaint, Junkheap), one of them can ride the other, just like they did in the movie. 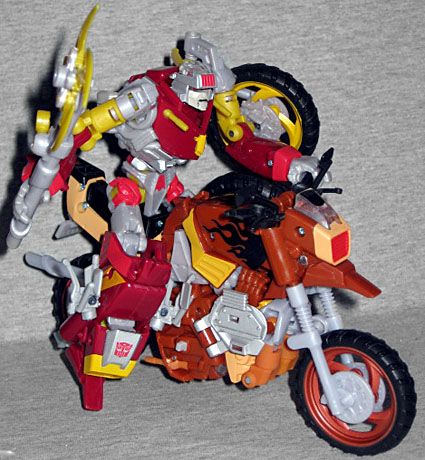 There are two holes in the bike's seat that match up to the pegs of his crotch. So the one in robot mode clicks in place and sits securely on the bike. His hands are even sized to hold the handlebars! So much fun! 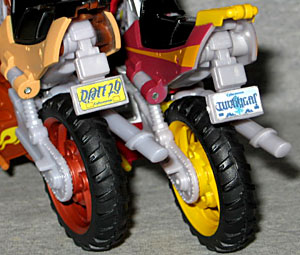 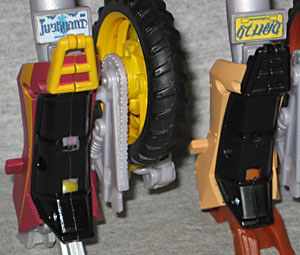 Nifty, huh? Here are the designs I came up with:

Those are all based on Oregon license plates, since that's where the original Transformers took place - the one with the tree is the "normal" plate, while the yellow ones are intended for motorcycles.

If you want to create license plates for your Junkions, download this PDF of the designs - it should be the right size for the figure when printed at 100%. I printed it near the edge of the paper, then folded a piece of packing tape over both sides to "laminate" it, so to speak, and cut the plates out and glued them in place.

Any other flippable license plates you'd like to see?

This entry was posted in addendums, customs, Hasbro, papercraft and tagged Reprolabels, Transformers. Bookmark the permalink.