Have you ever heard of the site UnderScoopFIRE? Yeah, neither had we. But they're into the same things we are, especially this month: the site is dedicated to the children of the '80s, and this is Old Toys Month, so our interests have aligned! And since today is WWEdnesday, we've decided to share with you a wrestling-themed post.

I you're not familiar with the Royal Rumble, it's a match with 30 participants: everybody draws a number, and that determines the order they enter the fight. That's all you need to know. We'll give you a small excerpt, but then it's off to USF to read the rest:

Anyone familiar with the Royal Rumble knows that there is much circumstance around who draws #1, as they would have to go through all 29 other competitors to win the match. The most grueling 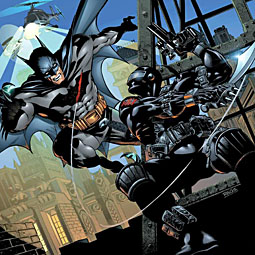 of tasks, running this gauntlet has only been achieved by 2 superstars in WWF/WWE history. Our favorite Arashikage clan ninja had the misfortune of drawing #1 in our Rumble.

Who would draw #2 and have to battle it out with Snake-Eyes for 2 minutes of hell? The music hits... it's Batman! The Dark Knight himself drew #2, setting the stage for one of the most epic battles ever seen. This random draw provided fans with the dream matchup of Snake-Eyes vs Batman for 2 minutes of non-stop action.

Yeah, that's just a taste of what's in store for you in the '80s Childhood Royal Rumble. They not only chose a great lineup of participants, they also do a great job of booking the match and providing color commentary. Seriously, go read it - there are several hilarious moments (to quote, "seriously, how did he not see that one coming?") and unless you scroll all the way down before you start, you'll never guess who the winner is. It's perfect!

This entry was posted in DC, Hasbro and tagged Batman, GI Joe, wrestling. Bookmark the permalink.