Since we reviewed the Rocket Firing Boba Fett today, we thought you might like some more info about the figure. For instance, here's the first take on the mailaway offer: 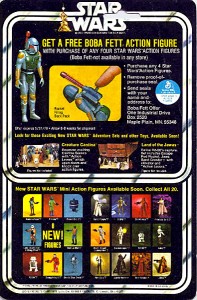 That was the original version. It was soon changed, since it had already been decided the rocket wouldn't fire. Their first solution? Just slap a big black sticker on there: 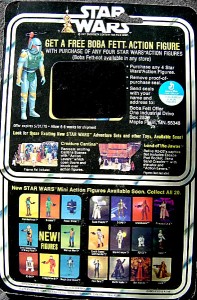 Nice. Anyway, they next came up with something a bit more interesting: vague text about the figure. 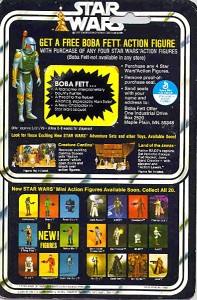 That's the same text that would later be put on the front of the finished figure's card (and the recent revamp). Eventually they decided they wanted even more secrecy, and covered the entire thing with a bigger sticker: 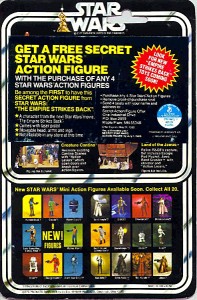 (Those pictures come from 12back.com, a very useful site for such things.)

So why did they drop the rocket-firing feature in the first place? Because of Battlestar Galactica. Mattel's BSG line had several vehicles with rocket-firing features, including the Colonial Viper. On December 31, 1978, a 4-year old boy from Lilburn, GA put the Viper in his mouth and fired the missle - it lodged in his throat and he suffocated. The Vipers were recalled, and the government was urged to toughen regulations on missile-firing toys. Kenner, obviously aware of which way the wind was blowing, changed the design of their upcoming Boba Fett. You can read several newspaper articles about the situation here...

This entry was posted in addendums, Kenner, Mattel and tagged BSG, Star Wars. Bookmark the permalink.