Ever wish you lived in a house made of Lego? You may not be able to, but only because you're not filthy rich and designing your dream apartment in Manhattan. 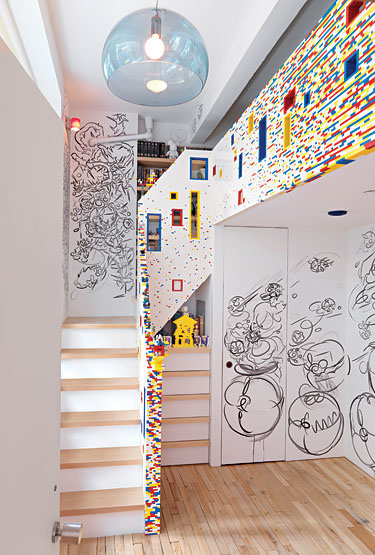 As reported by New York magazine, artist Melissa Marks and her husband bought an open, spacious apartment in 1994. But 15 years later, they had a 10-year-old son who would soon need his privacy, and the options were either move to a new place, or remodel. They opted to stay where they were, and used one of their son's favorite toys as inspiration for his room. They hired Queens-based Lego artist Sean Kenney to design and install a Lego wall and staircase. It took him and two assistants two weeks of 14-hour days to complete, though the exposed studs on the top of the surfaces mean young Archie and his friends can continue to build on them well into the future.

This entry was posted in Lego. Bookmark the permalink.