By special request from reader Fries Against, we present the first installment of our new feature, 365 Days of Minimate reviews! 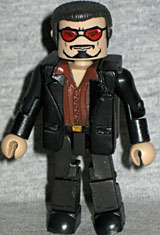 one conquest to the next until his harrowing experience in Afghanistan provided him the opportunity to became something more - a true hero.

Yes they did - but that's still in the future, as far as this figure is concerned. "Playboy Tony Stark" depicts Tony in the clothes he was wearing at Caesars Palace, before he even got on the plane to go to the Mideast: a black suit with a maroon shirt underneath. The jacket, shirt and belt are a single new sculpt, and the collar is open so you can see his chest. He's wearing red shades and has a slicked-back hair piece. If you take the chest cap off, you'll find no arc reactor underneath - which makes sense since, as we said, this figure predates all that.

After capturing Tony Stark, the terrorist known as Raza was revealed 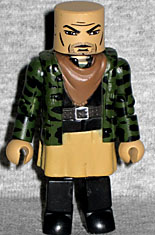 to be working for Stark Industry's own Obadiah Stane. His connection to the mysterious "Ten Rings" organization remains

Yes, it really does just cut out like that, with no period at the end of the sentence. "Remains" what, bio text? We asked DST: best guess is that it was supposed to say "remains unknown." Seems logical. Calling a terrorist cell the Ten Rings was a good way to start leading into the larger Iron Man mythology (though some people apparently got confused and thought Raza was supposed to be the Mandarin, rather than just working for him). Only thing I might have changed was the name: call them the Ashrah Jātim (عشرة خواتم) and make it a bilingual bonus.

The likeness of Faran Tahir is a good one. He has a slightly darker skintone than the three honkies in this set, and a bit of painted stubble. His keffiyeh, coat, shirt and izaar are all molded together, and while his keffiyeh lacks the pattern it had in the film, his jacket gets a great black and green camouflage pattern that had to be tough to get right.

Raza gets one accessory, a realistic rifle. It's not a piece that's been

seen anywhere else, which is a surprise: they had several prexisting rifles, of varying degrees of technology, yet they designed a new piece that has yet to show up again. Unexpected, but not unwelcome! It looks like a pseudo-M16 with a fancy grenade launcher underneath. He has a little trouble holding it, since the stock ends up bumping up against his arm, but you can get it in place with a little work. 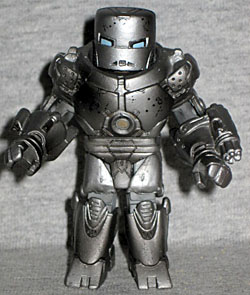 This figure is the old standby for action figure variants: the battle-damaged version. This figure is identical to the Series 21 figure, just with different paint apps: dark airbrushing on the waist, chest, hands and feet, and a few black dots of paint that we can only assume are meant to be bullet holes. Unfortunately, just like the Battle Damaged War Machine, the base body is too dark for the details to really be seen well. 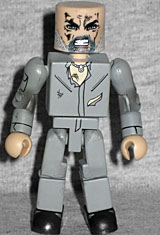 Just like the previous Iron Monger Minimate, if you strip off all the various and sundry pieces of armor, you'll find a plain Obadiah Stane figure hiding inside. It's not identical to the last release, though. For one thing, this one has both hands and feet, so you don't need to borrow extras from another figure to finish him off. Beyond that, though, he's just as "battle damaged" as the armor was. Maybe moreso, since you can actually see his damage! He's still wearing the same grey jumpsuit, but it's got rips on the body and at the neck, and dirt on the elbows. His face has an entirely different expression, in addition to the scrapes and bruises.

Pushed past its operational thresholds and tested on the fly, 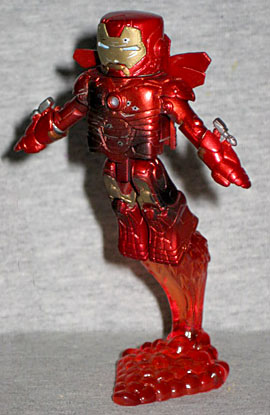 the Iron Man Mark III Armor is put to the real test during the final battle with Iron Monger. Future upgrades will be needed to deal with even greater threats.

As the bio says, this figure is taken from the end of the first movie, so it's the Mark III armor. He also gets a lot of extra pieces, like the back-flaps, "pointing" hands and exhaust stand seen on the Toys Я Us-exclusive Stealth Iron Man - this being the only time most those have been released in the traditional IM red.

Like Iron Monger, this figure's battle damage starts with dark airbrushing. But unlike Obi, Tony's paint goes further. His bullet holes are black dots surrounded by silver, so they actually look like they're punched into metal. There are also thin silver lines painted on the faceplate, suggesting cracks or cuts. Those sorts of details wouldn't have shown up sufficiently on Iron Monger, so the end result is that Tony looks more beat up than just "dirty."

Iron Man doesn't have any "standard" gloves, but he does have human hands - he has the stripped down legs seen on the mass market Mark III figure, and the paint detailing on the torso, but while some of the paint apps have been changed, none of them are "damaged," so there's nothing more to say about it. He uses the same hair as Captivity Tony Stark, but his face is much more beat-up.

Technically there's only one new figure in this set - Raza - but the combination of new accessories and new designs on the others make them all worthwhile. This was an Action Figure Xpress exclusive, limited to 2,000 pieces, and though it's sold out on their site, it's probably worth hunting down on your own.