Believe it or not, this is a Joe Friday review. 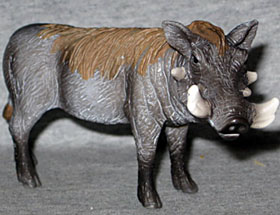 warthogs find their home in the grasslands and forests where they can find their favorite foods. Sticking to their omnivorous diet, warthogs dine on grasses, berries, fungi, bark, eggs, reptiles, birds, and even some mammals. Although they have poor eyesight, these mammals make up for their lack with their keen sense of smell. Able to dig for food or burrows, warthogs also are adept at running and jumping. Fending off predators, these relatives of pigs can be aggressive to humans, cheetahs, lions, crocodiles and hyenas.

Remember in the Dreadnok battle set review, when we lamented the fact that Gnawgahyde couldn't come with a pet warthog, like the original toy did. We even made a Figuretoon about it. But these days, just because a toy doesn't come with an accessory you want, it doesn't mean you're out of luck.

Schleich is a German company that makes PVC figurines - they started 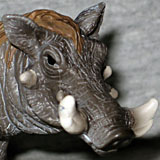 with Snoopy and the Smurfs, but these days they have lines based on dragons, elf-battles, the Wild West and, of course, animals. Zoo animals, farm animals, safari animals... all sorts of beasts, including an entire family of warthogs.

To go with Gnawgahyde, I went with the male pig. A.k.a. the one looking to the right instead of the left. Yes, the pig and the sow are pretty hard to tell apart. 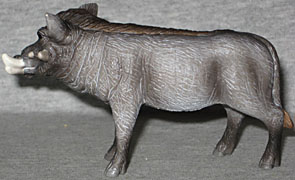 She has tusks, too, so the only thing separating them is which way their head is turned, and a small size difference. He stands about 2" tall at the shoulder, while she's marginally smaller.

The sculpt is very realistic. The warthog's skin has sculpted lines to suggest the fine hair covering his body, and there are thick wrinkles at the neck where he's turning his head to the side. The hooves are dark brown, fading quickly to grey 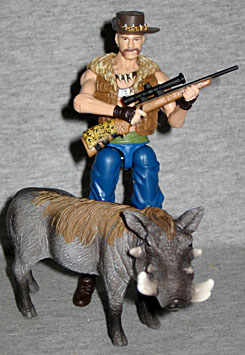 near the knees. A white wash brings out the details of the fur, and the long hair on his back is light brown. Shadows have been airbrushed into the creases of his skin, his eyes are gloss black and his tusks fade from dark to light gray.

Schleich figures aren't exactly cheap, but they are affordable. This warthog cost, like, four bucks, which is kind of a big bill when you're using it as an add-on to a $7 figure, but isn't a ton of money in the grand scheme of things. You can get Schleich figures at TRU, usually a couple aisles back from the Lego area, so it's not hard to get your hands on this little piggy if you want Gnawgahyde to have something to hunt. Or a friend to keep him company when he's out in the bush; we're not going to judge.

This entry was posted in addendums, blog exclusive review and tagged GI Joe. Bookmark the permalink.