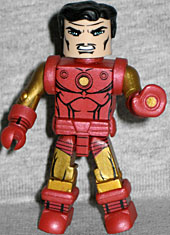 This figure lives up to the "Classic" Iron Man name: he's got the hip-pods on his belt, the rings around his shoulders and the stripes on his shorts. he even has his 1950s style haircut, because most designers' idea of "stylish" is what was popular when they were in high school, and this IM design is taken from the '70s. He has extra pieces around his boots and gloves for bulk, a ring at the neck so he looks fully armored, and of course a repulsor blast hand.

Classic Iron Man is packaged unmasked, but of course he still comes with his helmet. Unfortunately, since the mask is hidden in the package, I didn't realize until I opened it that the face had been applied crookedly. The eyes are uneven and the mouth is almost falling off his head. Sure, I could have gotten a replacement, but he looks cute, in a silly way.

Iron Man fills the variant requirement in Series 25, and his alternate look is dubbed Bolt Face Iron Man. Can you guess why? In addition to the 14 black dots painted on his mask, he has solid black eye slits and, perhaps most surprisingly, an entirely different design for his chest apps. Even the belt is a different piece, without stripes!

Capable of both saving the world and destroying it, Advanced Idea 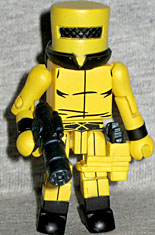 Mechanics is a powerful terrorist group consisting of brilliant yet misguided scientists determined to invent more and more destructive weapons.

Wow, an AIM Soldier! Or, wait, "soldier?" They're not soldiers, they're scientists. He may be cannon fodder, but he's still no soldier. He's a beekeeper [big-ass speaker, double woofer rumble tweeter --ed.] in his bright yellow uniform. There are wrinkles painted on his chest and back, black bands around his wrists, black boots and a fancy belt painted at the waist. He has a holster on his left leg, and a dark pistol that originally came with Punisher. His other gun was originally found on War Machine's shoulder.

And of course, there's the beekeeper helmet. It's fully detailed, with a black collar and a screened eyehole. It removes easily, showing us the bald, bespectacled scientist underneath. He's angry that you've discovered his face! There's a hole in the top of his head, so you can give him any Minimate hair you feel like, if you don't want him to be bald.

My Iron Man is a little derpy, but the AIM technician is really cool. And honestly, I'm happy with that arrangement: I have a ton of Iron Men, but this was probably the one shot at getting an Advanced Idea Mechanic.