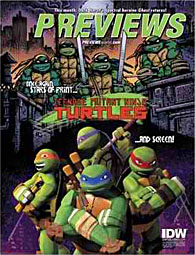 DC Direct doesn't have any action figures this time, just two new Ame-Comi girls: Brainiac and a new Harley Quinn, due on 10/3 and 10/17, respectively.

GI Joe fans will like the Snake-Eyes and Storm Shadow hoodies shown on page 388 - they're fully detailed, front and back.

It's time for the Halloween costumes, and page 391 has He-Man, Skeletor and She-Ra.

Page 399 has the first series of Expendables 2 figures.

Series 2 of the Walking Dead Minimates are on page 402.

Page 403 has a new Marvel Select Hulk, as a bearded barbarian? Go figure!

You can turn to page 416 to find the listing for Marvel Legends Series 3.

On page 419 you'll see NECA's Battle-Damaged Robocop, and some of the Transformers.

Here's an oddity: Toon Tumblers with the Masters of the Universe cast on them! Looks like the old Filmation models, two good ones and two villains.