Remember back in May, when we reviewed Future Foundation Spider-Man, and talked about how he was the variant, yet he was easier to find than the standard Spidey? Things may finally be turning around.

Peter Parker is, at his core, a scientist, so it's always nice 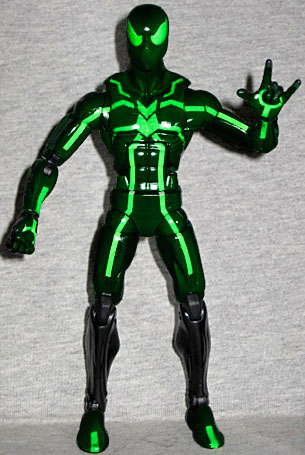 to be reminded of that. For instance, this suit was designed using an omni-harmonic mesh based on one of Hank Pym's theories, and is capable of bending both light and sound around the wearer. The green lights running over the surface are so he can actually see himself - to preserve the invisibility, they can only be seen using special lenses, like the ones in his mask.

Unfortunately, the green is a bit problematic. The lights glow, yeah? Well to simulate that, the figure's been painted with solid stripes, and then there's an airbrushing over that to create the glow. In theory it sounds like a great idea, but in practice... not so much. Just because it works on the prototype doesn't mean it works in production. It's like with Initiative War Machine: what should have been a subtle blurring near the edges is instead a massive overspray covering everything, to the point that he doesn't look black, he looks dark green.

You know what would have been better? Glow-in-the-dark paint. It still could have been green, but it would have allowed them to skip the spray. As far as painted glows go, the only times it's ever really worked are Marvel Select Thanos' eyes and Metallo's chest.

For a while, Big Time Spidey was insanely hard to find. But now, three and a half months after the figures first hit shelves, he's started to show up again. People all over the country have reported stumbling across him at Target - seemingly all at once. Whatever happened to finally allow the non-variant to see the light of day, we're glad. The figure's good, but not for the $200 he used to command.