Aaah-ha - Friday the 13th... maybe this is why they moved the con up a week this year. Today saw the biggest concentration of Toy Panels so it was a whole bunch of room hopping for this jaunty fellow, but 'twixt the Panels there was some fair shopping, exclusive scoring and celebrity spotting. 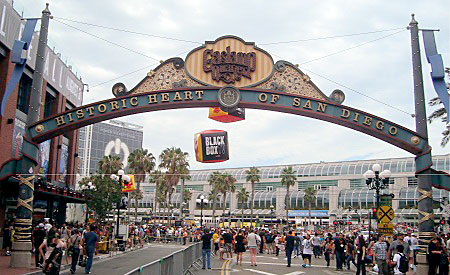 The day started off exceptionally early for me in order to make it to the con pre-parking crunch so once again I made it to the Sails Pavilion at 7:30am. In the past I was typically a 9am riser and a 10am arriver, but I'll be honest I'm kind of enjoying this early morning queuing and empty hall for about half an hour - it's as peaceful as the con gets. The Hasbro line was "off da hook" yet again so I opted for the Hall-Entry line so that I could book it to Lego as I desperately wanted the Hobbit Mini-Build I spied in passing yesterday. Well, lo and behold Thursday was Hobbit themed and today was Super Hero (tomorrow is Star Wars and Sunday is Ninjago) so rather than something unique they scanned badges to be entered in a raffle to win one of the exclusive Mini-Figures. Upon my afternoon return I was near ecstatic to discover that not only had I won, I had been assigned a Bizarro - the one I was desperate to have!

Well, after having my badge scanned it was time to check out DST and score the exclusive translucent blue Battle Beasts Minimate, and then on to check in on the unattainable Hasbro. Since no dice was to be had there, I basically milled around until 9:45 then headed up for the first of three consecutive panels:

then in the afternoon Mattel & DC Comics: A Heroic Partnership and in the evening a Solomon Kane Screening.

With some time to kill between the Mattel panels I did some more Hall milling where upon I picked the limited edition score CDs for Clue and Galaxy Quest - HUZZAH!!! It was then that I stumbled upon an epic Grail Fail... When I first saw Bowen's Magneto bust... well that is the piece that made me fall in love with Magneto (much the same way my lust for Deadpool results from the Bowen Bust's excellence) so I've been on the hunt for that super rare piece ever since. Well, folks, I spied it at a booth... and for only $80! I asked if I could open it up to check the condition and they said they'd only open busts after they'd been purchased. The adrenaline was pretty high so I agreed, handed over the cash and then cracked open that mint condition bad - and that's when I discovered the base was different. And the box had a 2012 date stamp. Crap, it's some kind of "v2." Well, it's still neat and a great piece... but then I just became consumed by what else that $80 could have bought... well, buyer beware - always check the box before you buy.

Anyway, my Bizarro luck held up as Hasbro had opened their booth to non-ticket holders around 2pm for only the instock items (Bruticus, X-Force 3-pack and Derpy will be impossible to get this year) so I scored up everything I was after (including a Super-Helicarrier for yo). Rolling on that high I went to the Mattel redemption room to pick up my ordered figures (after dropping the Hasbro stuff back at the car). I dropped that stuff at the car then went back to ogle some Evangelion Reboot Revoltechs and swung by Underground to get their exclusive Churchill set as well as finally pick up the "Every Doctor" Doctr Who boxset that I have desired and debated every time I've seen over the past couple years. I really, really, really love the Underground toys aesthetic and quality so despite only ever having seen a couple Eckleston episodes (yes, I understand Tennant is phenomenally better) I have a pretty healthy Doctor Who collection. 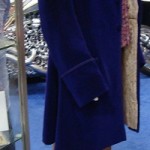 Also, I stumbled on the Profiles in History booth with many stellar pieces on display, including Christopher Reed & Marlon Brando's costumes from Superman (indeed it's grey fabric with a black "S"), props from Veruca Salt's personal collection (including the only known existing screen-used Gobstoppers) and Gene Wilder's costume from Willy Wonka and the mega scale Nautilus from 20,000 Leagues Under the Sea! 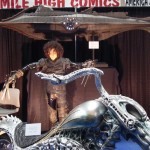 I heard one of the curators saying that when he examined the Nautilus he found 4 little tubes feeding to the back of the ship and seeming to terminate in the four "supports" around the turbine ring. Indeed there were small holes on them and he discovered that for all the underwater shots, which were done dry-for-wet, they shot out streams of Fullers Earth to simulate the bubbles - how cool is that!?

For the first time in what seems like years I actually managed to score a ticket to a free screening, the out-in-Europe and much lauded movie Solomon Kane so I grabbed dinner and ate in line to be sure I made it in. Indeed I did was treated to a fun movie for my trouble, and even got some cool swag from it too. All in all another fine day at the Con. 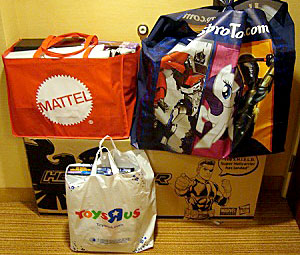 This entry was posted in SDCC and tagged SDCC 2012. Bookmark the permalink.