Like we said in today's review, Fall of Cybertron Bruticus comes in a really impressive box. The back has blocks of color to represent the Combaticons, while the front has an image of Bruticus stomping on Jazz: 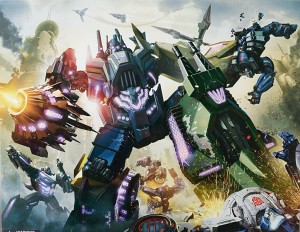 Inside the front flap you'll find game renders of all five Combaticons and Bruticus, plus the massive wall of text we promised you: 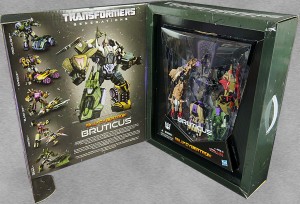 During the long, cold Cybertronian night, when Autobot infantry huddle in their trenches listening for any sign of Decepticon attack, tales are told. Most are of home, of peace, of hopes for the future. But there are also a few dark tales, the kind the old soldiers tell the new recruits in the hope of preparing them for the reality of war. The darkest of these feature the Decepticon known as Decepticon Bruticus.

His approach is heralded by the roar of cannon fire and the rumble of massive footsteps. The air around him ripples with the heat of his lasers, and the very ground collapses into rubble beneath his mighty feet. His fists can shatter mountains, topple buildings and crush entire squads. He is a walking Decepticon army, the embodiment of Autobot defeat, and his name means terror to all Autobots who have seen him and lived.

Many of the younger Autobots, secure in their inexperience, hope one day to see him, if only from a distance. But the more experienced troops know that such a hope is foolish in the extreme. For where Decepticon Bruticus goes, doom follows close behind.

The figure itself is enclosed in a stiff plastic box that's shaped like the ones the US Masterpiece figures come in (vaguely like a Decepticon symbol, with a cardboard stand to help hold it upright). The back has stock photos of the figures, and repeats the text again. It's all very nice, and yet it doesn't overshadow the toy inside. 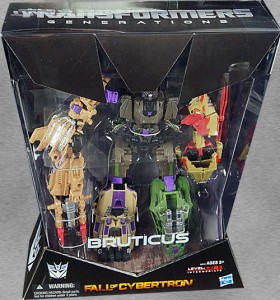 This entry was posted in addendums, Hasbro, SDCC and tagged SDCC 2012, Transformers. Bookmark the permalink.