There's a lot of talk about Hasbro's Avengers movie Helicarrier and whether or not it's big enough to really accommodate the toys. Spoiler: it's not, but the SDCC version, with an extra foot of length in the middle, comes closer to being adequate.

But compared to the largest toy ever made, GI Joe's USS Flagg? It might as well be a lifeboat: 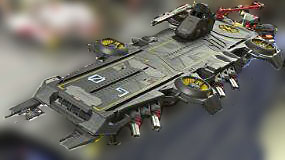 When the Flagg was released in 1985, it cost $89.99 - adjusting for inflation, that would be $191.92. Clearly a toy of that size would cost much more than that today: the much-lauded big Millennium Falcon from a few years back cost $150, and it was only ⅓ the size of the Flagg. We'd be lucky to get away with "only" paying $300 for a version of the aircraft carrier today.

This entry was posted in Hasbro and tagged Avengers, GI Joe. Bookmark the permalink.

3 Responses to USS Flagg - still the king of toys