Rustin's Spoils of the Week #70

Last Saturday I had a fairly expensive and pretty exciting haul - across Toys R Us and Target I managed to nab two hard-to-find comic villains and the latest series of my two favorite NECA lines!!! Both of the latter represent the final series to be solicited for their respective brands but I hope and dream and pray that there are at least two more batches for each - so, please, do your part and go buy all the Gremlins 2 and Freddy Krueger figures you can find to keep me collecting (and broke) - you're my only hope. 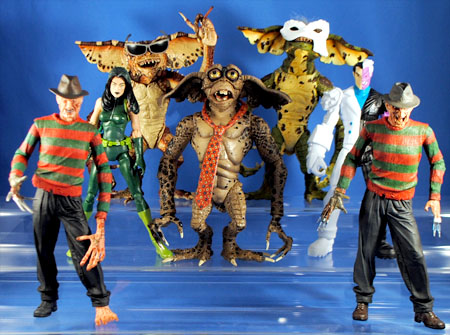 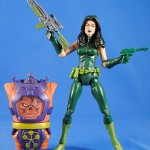 Marvel Legends Series 2 is certainly nothing special with just a hodgepodge of lesser characters and costumes so bland it gives DCUC a real run for its mediocrity. Add to that, the more preferable versions of figures are their "it's not a limited variant" Wave 2 figures, of which Madame Hydra is counted, so the whole thing has just been a big pain. I bought a handful of the Hydra soldiers from Hasbro's ML3 so I very much want a leader for them to rally behind. She's basically just a repaint of the Maria Hill figure so there's nothing that exciting goin' on here. She gets the familiar ML machine gun and Nick Fury's pistol too, so basically only the head and belt are new (I don't know, maybe the gloved forearms, too). There's sadly just nothing exciting about this figure other than that she is the boss of my armybuilders and therefore more relevant to my collection than Madame Masque, but that means I'm stuck with the Red Skull face in my Arnim Zola BAF torso. I'm tempted to get Masque mainly to have the proper face but at $15 I think I can just accept a slight variation to a character I only recognize because his name was in the movie. 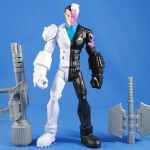 Another somewhat interesting entry in the overall disappointing new Batman line. I'm a big fan of Two-Face so I was sold on this purely because of the character, similar to the Killer Croc figure, despite it being a questionable design. The sculpt is soft and broad in detail with paint to match. I do like the color combinations of the purple and turquoise with the white and black, though, but they could have gone further in differentiating the two sides sculpturally (the gauntlets and bicep pads are too similar, for instance). He also gets not one but two accessories - a gigantic gun and a battle axe. The axe can connect to the gun in a couple places, which is good because Harvey only has one "holding" hand. This isn't a bad toy, but for the $11 I paid for him (at Toys R US) it's pretty disappointing. 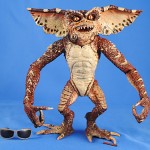 Huzzah! The second series of Gremlins is out! I love Gremlins 2 and I really dig these figures so I am quite happy to get them and am doing my part to support the line so that we can get more (indeed, as promised, I bought two of this figure!). This guy is the line's first armybuilder being a generic Gremlin from the film, though you could have him be your pre-chemical Brain Gremlin should you feel so inclined. Unsurprisingly he comes to us based entirely on the "Flasher Gremlin" but what is surprising is that this is exactly the "Flasher" just sans coat with new paint. I assumed they'd use that figure but give it George's hands and maybe Brain's chemical bottle but no sir. The same "coat-holdin'" hands along with the sunglasses and cigarette, though the latter is now painted solid brown (a shame as a second of that easily lost accessory would have been more welcome). I really do wish they could have given it the alternate open hands which would allow for better posing possibilities, and indeed that may prove to be a deal breaker for some. He's worth getting regardless though, as the sculpt, paint and articulation are all everything we've come to expect from NECA, plus the brown coloring helps set him apart from the rest of the horde - but act fast, he's the short-pack of the series. 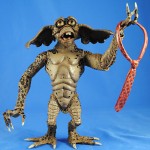 I'm sure that the absolute minimum of changes, and therefore money spent, on the Brown Gremlin is a direct result of this guy - the one remaining named, non-mutant Gremlin yet to be released and that is because he is 70% all new tooling! Only the hands (they're George's) and legs/feet are re-used here. Lenny obviously gets a new head, but also a much chubbier torso and arms with a more quilt-like scale pattern on them. His back has nice ridging making him more crocodilian than his brothers, but my favorite part is that his neck is part of the torso so that he has a double-ball-jointed head, as opposed to the balljoint being on the bottom of the neck, as on the other figures. Lenny's articulation is also better for posing, both in variation and realism, though the range of motion could be better. His one accessory is a necktie which can be easily removed by popping off the head. Sure it's not the most exciting thing but it's just as memorably character-specific as everyone else's pack-ins. Lenny is definitely the star of this series and must-have for anyone into this line! 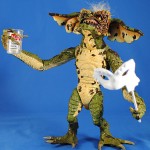 This is Series 2's "cameo Gremlin." Much like Flasher in Series 1, this comes from a single but memorable shot, this time playing up an homage to classic movie monsters (if not Pop Musicals) with this reference to the Phantom of the Opera. We get the generic Gremlin body here, seen on both Flasher and Brown, but with a new head and hands. Both hands are sculpted to hold his accessories with the left being open for the jar of acid and the right being the same sculpt as Flasher/Brown but now with an extra groove in second knuckle to hold the mask. I would be remiss to point out that both accessories are bit "off" in that Phantom never actually held the jar, it only hit him in the face, and that the mask had no "stick," but hey - NECA is so on the ball they made the stick removable so screen accuracy can be had! The mask is a good sculpt and fits snugly on the face, which is appropriately scared up. The whole head is new, even the ears (despite looking very similar to Lenny's), and there is a small groove atop into which "real hair" is glued. If I have any problem with the figure it's that. I've never been a fan of "real hair" on toys and it certainly runs counter to the aesthetic here. Also, it would have been cool for this guy to get the cape he wore from the film in lieu of the acid and mask-stick, but I'm sure it didn't cost out in either plastic or soft goods. The paint is strong, as usual from NECA, and matches the Flasher so if you were smarter than me and got a second one as a generic Green Gremlin then you could A/B these two just like Brown and Brain! 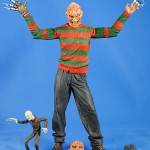 Okay, even I'll admit it's starting to be a little hard to tell these Freddies apart. I've only ever seen the original and New Nightmare so my enthusiasm for this line is based entirely on the dynamic looks of the character, NECA's immaculate sculpting and my inherent interest and appreciation for "variations on a theme" (so basically I'm NECA's ideal shopper for this one). This release gets the syringe fingers from when he killed Tanya (thanks YouTube!) which are impressively cast in translucent blue then painted over so that the syringes are see-through. More importantly, though, are the interchangeable heads - both are the same sculpt, which in turn, I believe, is the same sculpt as the alternate head from the previous figure, the twist though is that this one finally comes with the + on the forehead! I'm not sure the background of that cross but it's lightpiped; neat in theory but kind of unimpressive in practice. The puppet is pretty cool and continues NECA's one-up-manship of McFarlane (this was the accessory for Freddy in Movie Maniacs Series 1 - the line that changed the world) and while it too has swivel shoulder articulation it also gets a removable blood puddle base and a balljointed neck! I'll admit that this Freddy is a bit of a stretch but I love this line and am pleased to have a fully sweater-ed NoES 3 Freddy but, as the man once said, your mileage may vary. 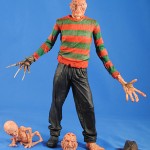 The sculpting here is amazing - the new heads and Baby Freddy are just off the charts and it's this kind of quality that keeps me coming back for more. The colors of the clothes are also much brighter than any of the other releases, particular the metal on the glove and especially the red of the shirt. His "I'm different" parts consist of a giant left hand and foot, a bit cartoony but fun nonetheless (though the green veins on the hand are a bit too "toy-ish" for me), plus he gets two new heads each with great expressions, especially the first closed-mouth, slightly scowly blank expression face we've gotten yet. As a pack-in we get what is presumably the titular "Dream Child" and it's a truly masterful sculpt, which even has a double-balljointed head! So, with so much to like why I am so unhappy? They used flesh toned plastic! Every other figure in the series, and indeed every non-flesh part of the figure, gets its color entirely from paint, but ooooh nooo, not the skin! That just looks as cheap and terrible as possible! I had hoped the promo images were just prototypes but flibbitygibbit they consciously ruined this figure! I'm not sure if it was cost or whatever the heck, but it was 1000% the wrong choice and I would give up any of the pack-ins to have that money diverted to the paint so that Freddy could look as good as not only the sculpt deserves but as all of the other 5 figures do! This easily could have been one of the best figures in the line but instead it's the weakest. Harumph, sirs, harumph!!! Regardless I still want more. I'm DREAMING of a New Nightmare Freddy done in this style and would welcome a NoES 6: Freddy's Dead Freddy to have one from every film, and even a new Freddy vs Jason Freddy so that we could have every incarnation of The Man in one cohesive style (though that would require a re-release of this figure with proper paint, grumble grumble).

This entry was posted in Hasbro, Mattel, NECA, Rustin's Spoils of the Week and tagged Batman, Marvel Legends, Reel Toys. Bookmark the permalink.

16 Responses to Rustin's Spoils of the Week #70