Playmobil follows up last year's launch of the Fi?ures line with another two-fold series. This second series certainly trumps the first and goes far towards establishing Fi?ures as fun collectible series and a valuable piece of the overall Playmobil collection. We get more interesting, more diverse and all around more appealing figures this time around! Here, we examine the second series' wave of Girl figures.

Continuing to follow Lego's lead, each wave comes in a uniquely colored package, this Aqua-Green for Boys and Golden Yellow for girls. I really, really, really like these color choices, especially as a pair and more importantly because they don't play into the tired old Blue vs. Pink conceit we saw with Series 1. Along with these better packaging colors we also get an improved insert which features all 12 figures in the wave on side and an illustrated suggestion on how to mix'n'match parts on the other. The latter is a little underwhelming and I think they'd do well to show how four figures can be combined to created four figures rather than how they make up one. Best of all, though, is that the "checklist" side now includes assembly instructions at the bottom - a huge improvement as these Klickies are not as intuitive or as easy to construct as a Lego mini-figure.

Just as with the first series, the back of the package comes with series of numbers stamped on it. In theory these should tell you what figure you're about to be purchasing without having to go through the time-consuming, finger-aching feel testing. However, we all learned on Series 1 that these numbers weren't always consistent. It's unclear if they are only specific to their case, palette, region, factory, etc.

And now, if you'll pardon my name-guessing... the figures: 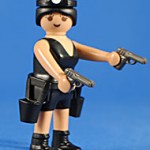 Whoa... Playmobil is now doing licensed characters? I mean, come on - this is clearly the movie version of Lara Croft/Tomb Raider. And you know what? I'm not too crazy about it. Not only do I ardently never want Playmobil to take on any licenses this is just a boring-as-hell figure. All black? Really? She gets two handguns, a neat double-holster belt and a silly head-lamp. I imagine that this could be cool for all of the no-one who collects the Special Agents line, but it's just a conspicuous oddity to me. 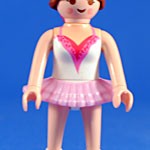 Now this is a great use of the single release format. A figure that doesn't exactly fit in with any singular set but works very well for the City Life theme and invites some fun stage customizing. Plus, she looks great too! She uses the new bikini bottom waist (which actually has the arm/head sockets molded in place, so that's one less thing you have to construct) and gets new legs with ballerina shoes. The Tutu is a separate piece which fits on during figure assembly. Everything is well sculpted and works nicely in the current Playmo-aesthetic. Plus, she's a great battle-builder and I'm even tempted to triple or quadruple up. 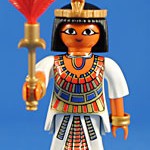 This is probably my most anticipated figure of this Girls Series, because it's so recognizable, well executed and will go exceedingly well with the recent Rome theme! Now I just need the Mounted Centurion to be my Mark Antony. She comes with the feathered fan what came in one of the Egypt sets, which is a nice inclusion, and a super cool crown with a cobra on the front! I'm not sure if this was in the Egypt theme as well but it's perfectly sculpted and detailed! I'm tempted to get another just because I like it so much. The eyes are painted on over the standard Klicky eyes and I'm undecided on them. On one hand they're appropriate, on the other they just seem so very large and stand-out-ish. I do have the old Cleopatra Special figure up in the attic, but this one is certainly the more preferable of the two. 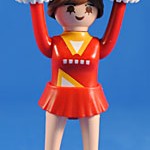 You know what, I'm surprised by how much I like this figure. She just works out perfectly for what she's meant to be, with all of the sculpts and colors harmonizing well. Like the Basketball, the Pompoms are hollow and have a little tab for her to hold. The miniskirt is a separate piece that slides up, over the torso during construction then rests on the hips. She uses the new "bathing suit" legs which I've not had before. The legs are linked and move in unison but interestingly, the bikini bottom holds them and extends up to become the "skeleton" that grips the shoulders and into which the neck plugs - pretty interesting design innovations. This is, in essence, a perfect figure. Something great on it's own but also worth armybuilding. Especially if I collected City or School I'd get a hole bunch of these! 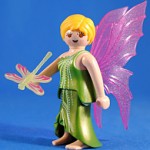 A marked improvement over the first series' Faeries, this one is just darn cool. The green dress and translucent pink butterfly wings look great together. Of course, the wings are molded folded together so that is pretty darn aggravating, but we'll survive. She gets a translucent yellow dragonfly buddy which has a handle underneath so she can hold it. You know, when I popped the hair on her I began to suspect that this might be meant to be Tinkerbell. That could be cool, were they to do a Captain Hook and Peter Pan (plus Lost Boys) in the future (though the pirate in the Boys wave could be Hook). However, I think the pink wings hold her back from being a true Tink, which is just as good. This is another one well worth your time, and is another bit of perfection for this kind of line. It'd look good in the playroom and the office desk. 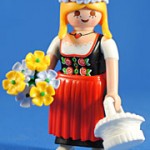 Clearly a thematic pairing with the "Bavarian" in Boys Series 2 this young lady comes decked out in equally classic European duds. She comes with an apron, bouquet and a basket as well as a "flower tiara" (isn't there a word for those?). Each bloom is a separate piece, including four for the tiara, which plug into place on green pegs. This is a great figure and does what Playmobil does best - leave the options open! She'd be right in place on the streets of an olde village, on vacation with her Bavarian husband or waitressing in a theme restaurant. Another figure I certainly recommend! 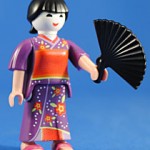 After Cleopatra this is the one I wanted the most, and indeed she turned out pretty cool. In essence she's a repaint of Cleopatra, though now with bare feet. I really like the purple kimono as it's splendidly different from the expected red and it helps her really stand out in any crowd. Like the Ninja in the Boys wave her head is a solid black piece, in this case cast in white, with her face painted on. It's a fair approach as it allows for red lips but dark eyes, though the paint is noticeably sloppy on mind. She comes with a fan and a red flower which clips (with some effort) over the base of her pony tail. There are also two slippers which come attached and are oddly cast in rubber. I foresee that being a bad a idea and them deteriorating over time but we shall see. Regardless this is a true star of a figure and exceedingly well worth your time and $2.99! 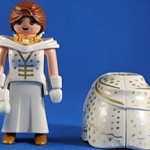 Last time we had several "big gown" figures so I like that they trimmed it down to one but are keeping it going as a sort of sub-theme (similar to Knights in the Boys line). There is a lot of gold paint here to help break up the white and give her a very nice look, in fact I'm surprised by how much I do like this figure since gold-on-white tends to look pretty tacky. She gets a white purse with gold bow plus a big white bow for her... derriere as well as white flowers-on-a-string for her hair. It's a figure that succeeds in the execution but I must confess, I don't see where she fits in to any collection... a bit too "real world" for Fairy Tale Castle, too formal for City but too much gold to be a Bride, I just don't know. Still a neat figure, though! 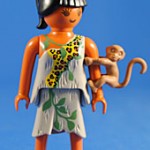 I don't really understand this figure or where she belongs in the collection. Like the Cave Woman in Series 1 she uses the new fur dress from the Prehistoric line but adds some vines painted over it. She gets a blue flower that clips onto the back of her hair and a little monkey friend. It's good for what it is, I just... like I said, where does she go? Perhaps a novelty attraction for folks from the 1900 theme to gawk at, perhaps? 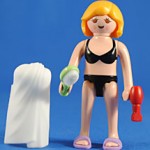 I almost got the new(ish) City Bathroom set for the novelty of a similar figure but am glad I waited for this single release. This is a perfect example of Playmobil's somewhat odd sensibilities. The figure's body was first seen in beach sets giving a proper modern bikini/bathing suit body for women, but put in this context, with a towel and bathroom accessories, well... we now have a figure of a Playmo-Woman in her underwear. That's pretty much worth the $3 right there for the pure novelty of a "children's toy" in its knickers! But it's a good figure too - she gets five accessories including sandals, a hairdryer, a hairbrush (which is surprisingly good with it's two colors of plastic) and the impressively well sculpted towel-wrap, which is split up the right side for putting it on and taking it off). You do have some latitude with her by presuming she's in a bathing suit, but she's a figure done well enough it elevates her above the realm of simple novelty. 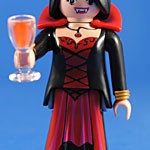 Like Cleopatra and the Geisha I was very much looking forward to this figure, though I knew I'd have complaints. Chief among them... fleshtone skin? Dracula was glow-in-the-dark, shouldn't she be as well? Accepting that though, there is the super wacky eyes - well, it turns out she is using the new alterna-face head and has a normal Playmo-face on the opposite side. That's probably for the best as now she can be an Evil Queen or something. I do like the maroon collar she has, which clips on at the neck, but all I can think off when I look at that hair is Lucille Bluth from Arrested Development. Perhaps the highlight of the figure is her glass full of blood! Well, while it is a very cool piece, the "drink" is orange, so maybe Vampira just needed some juice. 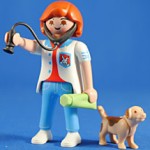 Were it not for my desire to complete sets and review them for you fine folks I would have passed on this one. Despite being an adamant animal lover I simply have no interest in Veterinary toys. The stethoscope is a rubber piece which fits into the "beard wedges" on the head and under the hair. Her hairpiece is exceptionally hard to click into place, especially when involving the soft rubber tabs from the stethoscope. Also included is an adorable little doggy and a terrifying neon green tube of god-knows-what that will have to go god-knows-where. That poor, poor lil' pup...