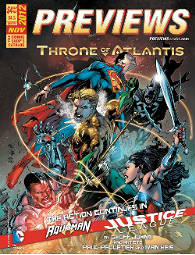 DC has two Masters of the Universe comics listed on page 140: issue #6 of the regular book, and "The Origin of He-Man" one-shot.

IDW is doing another one of their licensed crossovers, this time including Mars Attacks The Transformers. Page 153 has the info.

Rather than skipping over the book section, as we normally do, we're stopping on page 354 to draw your attention to Toy Confidential: The Secret Life of Snarky Toys, which sounds a lot like our Figuretoons.

The clothing section on page 368/9 has My Little Pony in both t-shirt and bathrobe forms, and a new GI Joe Snake-Eyes shirt.

Somebody out there is sure to want the Mego-styled Knight Rider figure, right? Page 376 is betting you will.

Right next to that on page 381 are two Mattel offerings: a Batman Unlimited series with Dark Knight Returns Batman and the Batman of Zur-En-Arrh; and DC Unlimited, with videogame Batman and New 52 Wonder Woman.

Now this is interesting! On page 385, there's a listing for more Marvel Universe three-packs, and while the images show the Guardians of the Galaxy and Thor/IM/Red Hulk, the actual text is for sets we haven't heard anything about before: West Coast Avengers, and Inhumans sets! A scoop straight from the pages of Previews.

For $120, you can own all 11 Doctor Who Doctors. They're on page 408, along with armybuilder sets of the the Lego-knockoffs: Weeping Angels, Cybermen, and red Daleks.

Page 411 has Figma figures (aka, the nicely sculpted and articulated ones) of Skyward Sword Link and Metroid Other M Samus Aran.

You can then go back to page 417 for an import of a really nice Mega Man toy, with a lot of different accessories.