This story is from earlier in the year, but it seems like an appropriate time to share it: 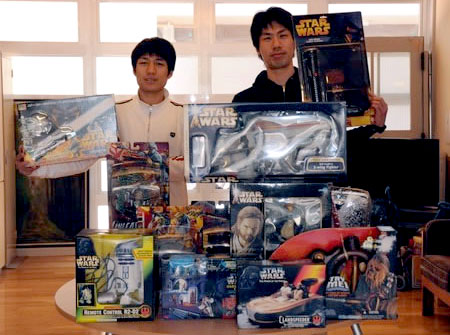 Three boxes of Star Wars toys were found left at a children's welfare facility in Yokohama, Japan along with a letter asking that they be used for the sake of the children. According to police and the facility, Seibo Aiji-en, the cardboard boxes were found outside the facility's rear gate on April 4 after midnight by two live-in employees returning from a party. Police opened the boxes and found around 40 toys, such as Star Wars figurines. A letter in one of the boxes read in part, "it would be great if there are children who like Star Wars, but I'll be happy if the toys are made use of through means like auctioning."

Looking at the toys in the picture up above, those were all in somebody's collection: they're not new things you'd buy off the shelf today. Why not follow this mystery man's lead and donate some toys of your own to needy kids? Remember, it's not only Toys for Tots time, it's Geeks for Tots time!

This entry was posted in news and tagged Star Wars. Bookmark the permalink.