You may recall a few weeks back when we told you about the Legendary Monsters Kickstarter. As predicted, that one didn't meet its funding goal, but as promised, the creators are trying again with a much lower target.

This time the price they need to hit is only $25,000, which is a ton more achievable! They've already got more supporters and more money than they did last time, so this one is on a roll!

As a reminder, the guy behind them has been trying to make them a reality for over a decade. The prototypes were shown in ToyFare magazine ages ago, with a target release date of Fall 2001. Here's a shot of them from way back then: 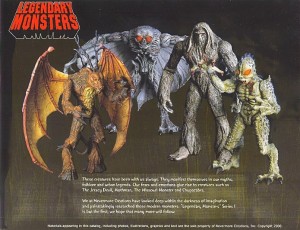 On the down side, there are no longer any victim figures, and no display bases. However, there are now glow-in-the-dark options, and they look awesome.

This entry was posted in Kickstarter, videos and tagged GI Joe. Bookmark the permalink.