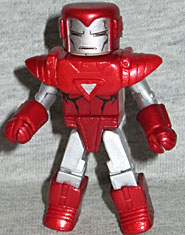 experiment and work out new ideas with his armor technology. The Centurion armor's "field-test" was against Obadiah Stane - with all of Tony's friends, business and his very life at stake. The defeat of Stane brought about a renaissance for Tony and Stark Industries.

There was an exclusive Silver Centurion Iron Man released in the early days of the line - 2004 - and it took until 2010 for us to get a second. The Minimate uses add-on pieces selectively, to bulk the armor up in all the right places. He gets new gloves and boots, as well as a unique belt and a chest cap that creates the Silver Centurion's distinctive shoulder pads and triangle chest beam.

You can strip the figure down, if you so choose. If you take off his strangely ill-fitting helmet (it doesn't come down far enough to cover the entire head), you can replace it with shaggy black '80s style hair. He also has two bare hands. The metallic red paint used on the helmet has transferred to the head, so he looks like he has a bad sunburn or some big bruises. 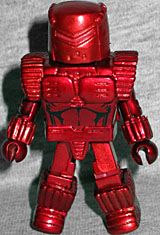 Crimson Dynamo was placed in cryogenic stasis, and was awakened following the detection of a nuclear detonation. In the battle that followed his awakening, the Dynamo was assumed to be a casualty.

The metallic red used for this figure really captures the look of the character in the comics. This isn't the modern "samurai" armor that no one would recognize, but instead the classic design. He has a large chest cap to create the ridged shoulders, the vents on his pecs, and the distinctive crotch plate. Black Widow's bracelets take care of the wrists, and the boots are new. Of course, there's no way his helmet could be a repaint, because it's got a completely unique shape that this figure handles with aplomb.

If you take the helmet off, you'll find a glorious handlebar mustache that would make even the Iron Sheik proud. He also gets a shock of dark brown hair combed back over his scalp. He's not bare chested like Titanium Man was beneath his armor: instead, he has a metallic red shirt with a black hammer and sickle over the left breast.

Minimates Series 36 was entirely Iron Man-based, coming (as it did) hot on the heels of the movie. And even with Stilt Man to contend with, this is the best pair in the series.