Rustin's Spoils of the Week #90

When I was a spry young lad, and was wont to be at Target and Toys Я Us at opening on Saturdays I also fell under the enchantment of the fabled "Black Friday." Well, that lasted nay but two or three years before the cost exceptionally outweighed the gain of such experiences and ever since it's been of little concern to your author. Well, Mattycollector has co-opted the sales event and turned it into some great deals on their site. Add to that some toy perusals while Christmas shopping on Amazon and you get what you see below - a veritable online haul. I'd also like to mention that I broke down and got the carded King Grayskull, despite having two of the original, mainly for the blue orb to go with the awesome pedestal that came with the White Sorceress who I didn't realize was done "touring conventions" before she sold out. So... I don't have her and thus that guy gets added to the unopened MotUC pile (but thankfully Castle Grayskull will come with a receptacle for that ridiculous ball). 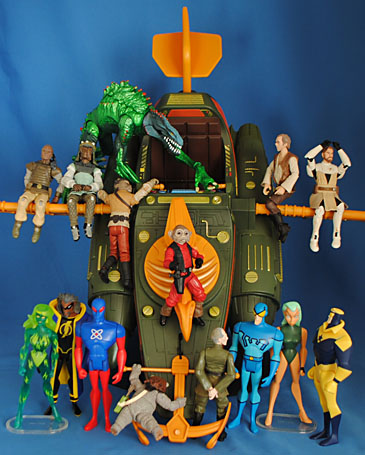 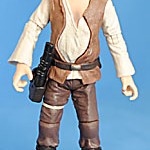 Evah'zAhn or EvAy'sahn? I always went the former but apparently some go the latter...? I have been waiting forever for this guy! The first release, from the cinema three-pack, was fairly bad even by those late '90s standards so this figure is long, long, long overdue. It's pretty good, though honestly not quite as "exciting" as I was hoping or as the new-ish Ponda Baba. He comes with voluminous articulation and a big-ish blaster. He was released in two different paint styles though - one with his facial scar painted pink and one without it painted. I decided on the latter since it seems somehow more film accurate and the pink paint seemed pretty toy-ish in person. When compared to other Cantina Denizens it's a bummer this guy didn't get a blue-milk glass, or an alternate, pointing fingered, "You'll be dead" hand. 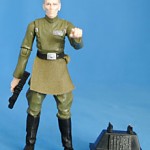 Just like Evazan, a figure in long need of an update... and alas that wait continues. I'm not crazy about the cloth skirt. I get the idea of it but without his council chair why would we ever need a sitting Tarkin? Plus, the costume skews pretty olive in hue though it appears more gray onscreen, but the real bummer is the likeness. Despite its '90s-ness I think the original figure from Kenner looks more like Peter Cushing than this. Well... to take the sting off he comes with the same blaster as Evazan (but no holster) and an all-new mouse droid (both pairs of wheels are on separate axles so this one actually rolls). I'd be lying if I said this wasn't a disappointment. 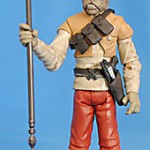 Well, I don't understand the red bandana versus brown bandana running change but seeing as I seeming can not find the red one anywhere, brown it is. Barada (as I care to remember him) is nothing all that special, to be honest, but as a recognizable Skiff Guard is much desired by yours truly (not to mention an update sorely needed). He comes with a long-handled axe and blaster, and is right in line with everything you'd expect from a Vintage-style figure. I do particularly like how the head came out - nice sculpting and a subtle wash to bring out the detail. 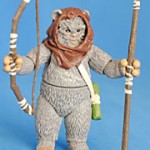 Another Ewok! These single-packed Ewoks sure aren't fun on the wallet but at least they're given plenty of accessories. Lumat here gets the traditional cowl plus a spear, bow and three arrows (one of which I appear to have lost already) which fit on the bow via a small clip and in the green quiver hung from the cowl. Also, despite looking like a V-crotch, both hips have a balljoint, which is a pretty nice touch. This is a very solid release and I'm also pleased to add to my "teams!" 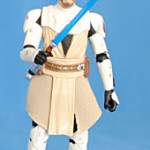 Even since the Gendy Tartokovsky's Clone Wars introduced (and blew my mind) with Clone Armored Obi-Wan I have been relatively obsessed with that look, so of course I had to get this sucker. In all likelihood this is just a kit-bash but it looks good enough for me. What else can I say? This is another "what you see is what you get" release, but at least he's a bit more functional and less "extreme" than than the previous "live action" interpretation of armored Clone Wars Kenobi (though I'm not terribly into into the white collar on this one). 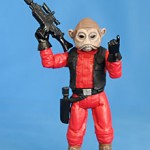 We continue this week's trend in "Star Wars characters that desperately needed an updated figure" with Nien "don't call me 'numb'" Nunb! This is just about as good as you could possibly hope for from one of the least interesting character designs and costumes in all of Star Wars. He gets a blaster and a redonkulous rifle that feels very much a delightful throwback to the silly weapons that came with most of the Power of the Force 2 figures back in the '90s. 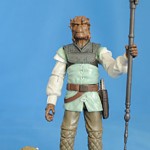 In 2010 we got an updated Klaatu so with Kith'Barada'aba above the Gort command is now COMPLETE!!! I quite like the Nikto head and am always pleased to get toys with it. I also like the light, almost pastel, shades of this costume. It feels 'right' for the deserts of Tattooine but also differentiates himself from his comrades. Included is a removable helmet (which falls off with great ease), axe and blaster. I really like this figure and he too is a most welcome figural update! 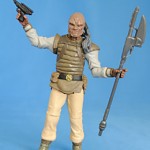 Weeeeeeeeeeeeequaaaaaaaaaaaaaaay! I've always liked this character - he being the only Jabba's Palace denizen I had as a kid. That said, though, he also looks damn cool! Like Nikto, I love his light shades of tan, brown and blue but there is something about his padded ribbing on the jerkin that works particularly well for me. Of course, there is also the phenomenal Mummy-esque head to love. He comes with his blaster and axe, as well he should. I'm really very impressed by the shoulder pads. To look at them is to not see a seam on the top but despite that he has full balljoint range! That is some excellent engineering there. My only complaint with this figure is that I've never seen him in stores as I would happily get myself a second! 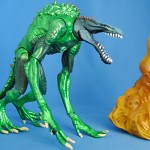 Siiiiiiiiiiigh. Completionism, you are a fickle mistress. This was the last of the movie GLs I needed (or "didn't have" rather, because come on) so now my Parallax B.A.F. can be completed. If only I cared to! The idea here was to partly take the hit for you, dear readers, to review all of these so that you wouldn't half to, but frankly they are just so uninspiring I'm bored to tears with them. At least the metallic green paint looks cool. He comes with the atypically detailed and highly articulated by barely move-able styling of all the Green Lantern Movie Masters. He also gets a unique chunk of Parallax which is necessary for connecting several pieces making him a significantly important figure for you if you wanted to build up the bland Big Yellow. At least this only cost me $7. 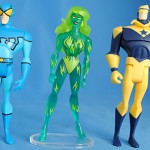 One of the final batch of JLU sets which features one re-release and two new characters. We get another Booster Gold who is wholly unnecessary (though at least it's not Batman or Superman) but a plausible pairing with Blue Beetle. BB comes in his classic Silver Age costume, which is just one of the coolest looking comic book costumes I feel. It fits in the JLU style quite well, indeed so much so he is pretty much the only reason I got this set. The third figure is Fire, one of the infinite "who?" characters in DC's stables. I'm familiar with her pretty much only because of a previous JLU figure so clearly my interest in her is markedly low. On the plus side, though, her body is cast in a translucent dark green, and her hair in a translucent light green, so she is, at least, visually quite striking. 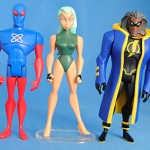 The rarest of all things! A JLU three-pack in which all three figures are new and unique to the set! This set allows us to complete our "Future Justice League" from Batman Beyond and JLU (well almost, I think the only character missing is boy buddha Green Lantern, right?). Micron and Aquagirl are neither that exciting of figures but are good enough, though I do have to say Micron's head looks awkwardly close to a Grey Alien's. The real star here is Future Static who gets a new head, coat and, I believe, arms. I was never interested in Static Shock at all but was tickled by his appearance on the Future JL team. All in all it's a nice set and will go great with Future Superman and the Batman Beyond three-pack. 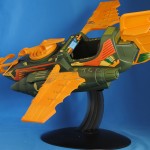 Well, what everyone is saying is 100% absolutely true. This thing is awesome. I was always on the fence about it and couldn't turn down the discounted price on the Matty sale. The first thing you'll note is just how big it is. There's probably little I can say you don't already know or have read, so suffice to say it turned out virtually note-perfect for a Collector grade vehicle. The base is also a thing of beauty - it's so functional (flexible but firm) it's possibly the best thing Mattel has ever released. I just adore the colors, detailing, everything about this ship. Now... I just need to find a place for it on the shelf and decide who will be its pilot.

This entry was posted in Hasbro, Mattel, Rustin's Spoils of the Week and tagged Green Lantern, MotU, Star Wars. Bookmark the permalink.

9 Responses to Rustin's Spoils of the Week #90