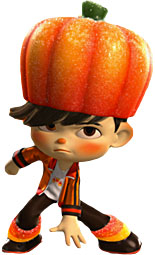 Round-faced little hooligan Gloyd Orangeboar loves nothing more than candy, candy, candy! Fortunately for him, Sugar Rush has plenty to choose from and he enjoys it all. For this fast-racing prankster, every day is Halloween.

It had better be Halloween every day, or else we'd

have to assume Gloyd Orangeboar's choice to wear orange, brown and yellow meant that he was a Burger King employee in the late '70s/early '80s. At a glance, the only thing particularly "candy-ish" about him is his big pumpkin hat, which isn't meant to be a real gourd. It makes the toy fairly top-heavy, making it hard to stand him up for very long. His jacket should have brown stripes on it, but that app didn't make it to the end. But his hair is the appropriate brown, not the green seen on most of the merchandise.

Gloyd's kart doesn't get a super creative name like 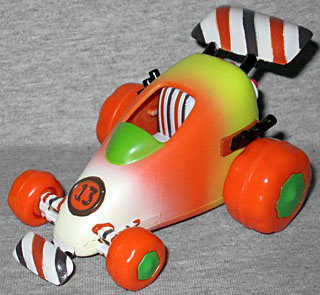 most of the others do: it's just called the Kernel. Now granted, that name makes sense, since the body is a giant piece of candy corn, but as far as names go it's not as clever as "Tira-Missile" or "Veloci-Wrapper," you know? In the movie, the windshield appears to be made of gummi, but the toy couldn't do that. The wheels are pumpkins (the sort sold in mixed bags of candy corn). There are three pairs of tail lights, surrounded by icing, and the exhaust pipes look like hollow chocolate sticks. The front bumper, rear spoiler, driver's seat and steering wheel are striped in orange, white and brown, and the pinched shape of them 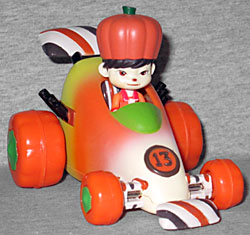 is reminiscent of those peanut butter candies - like a Zagnut or Chick-O-Stick, but bite-sized.

Thanks to its candy corn shape, the Kernel is the tallest Wreck-It Ralph racer we've reviewed yet. It's 2⅜" tall, even bigger than Gloyd himself. The figure doesn't sit as far down into the seat as he should (according to the animation), but that's nothing new - all the drivers sit up higher than they should - and he does look rather secure in there, thanks to the way the car rises up behind his head; only his giant hat comes up higher. 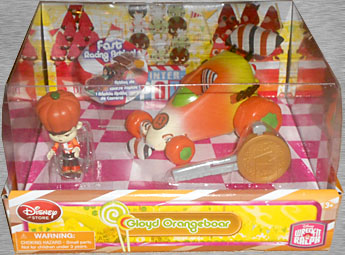 The racer sets are sold in nice boxes that display the toys well. The entire top is clear, allowing full views of the car and the figure (as well as the golden coin key). The bottom of the display is pink and white checkerboard, showing the start/finish line, while the back shows some of the grandstands - the chocolate kisses that will be heartbroken if Jubileena Bing-Bing loses, the peppermints that want Adorabeezle Winterpop to win, and Gloyd's own candy corn. This is a really lovely display, perfect for MOC collectors.