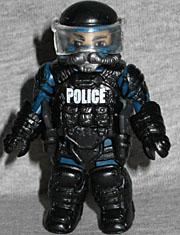 Equipped and trained to deal with the most Xtreme situations that can arise, this pair is extensively trained to prevent and detect crime as well as apprehend suspects when needed. These M.A.X. members focus on surveillance, protection and the investigation of major crimes.

The first LEO in this set is all decked out in SWAT gear: a helmet with a clear flip-up visor, heavy flak jacket, padding on the upper arms and thighs, heavy gloves and big chunky boots. All the pieces are molded with lots of details, making for a very realistic 2" policeman. Beneath the SWAT gear is a plain Minimate body, not painted with any details (since you wouldn't be able 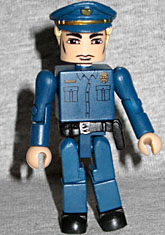 to see them before opening the toy). He has two small pistols that fit in the holsters on the sides of his waist.

The second officer is wearing his normal uniform, with details printed on the chest. This is an average beat cop, wearing his standard-issue blues. He's got black shoes, a detailed belt, and a nice new cap - no, it's not the same one M. Bison was wearing. He does have a holster on his belt, but it's non-functional, and isn't sculpted with a gun in it. At least he'll look normal when you give him a gun to hold. 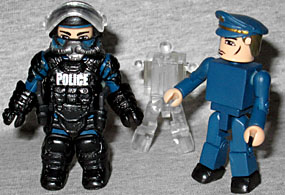 Both of the figures include enough extra pieces to change their clothes: the guy in the riot gear has extra arms, extra shoes, and a copy of the other officer's hat, just painted with brown hair instead of blonde. Meanwhile, the set also includes riot gear you can put on blondie, so you can have both cops dressed the same withough having to buy two sets. So that the SWAT pieces don't just crumble to the floor, we get a perfectly clear Minimate body to act as a mannequin. 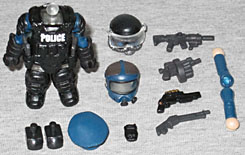 Additionally, we get four handguns (to fit in the holsters on the body armor), a mobile phone, a rifle with a grenade launcher underneath, an MM1 grenade launcher, a Remington 870 tactical shotgun, and a Winchester 1887. It's worth buying this set just for the accessories!

Which isn't to say the figures themselves aren't worthwhile. Wouldn't your Minimate displays look better with some cops running around, trying to capture supervillains or aid the heroes? These are nicely done!