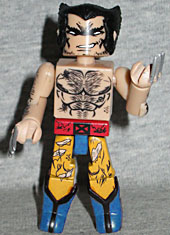 Wolverine is the best there is at what he does, whether its battling evil mutants to save the world or training a future generation of mutants to use their powers for good. At times the "Danger Room" lives up to its moniker, and Wolverine needs to have a supply of fresh uniforms at the ready!

Okay, frustrating! This figure, "Danger Room Wolverine" is nothing but the "Battle Ravaged Wolverine" (from the Uncanny X-Men box set) painted blue and yellow instead of orange and brown. Every single paint mask on the figure is identical, it's just been palette-swapped. Every rip in his costume, every hair on his chest, his inexplibaly blank eyes... all exactly the same. This is Wolverine #36, and he almost makes it worth not buying this set.

The Russian mutant, Arkady Gregorivich Rossovich, was turned over to the USSR's super-soldier project who set about transforming him into the super-soldier codenamed Omega Red. The procedure was interrupted by mutant operatives 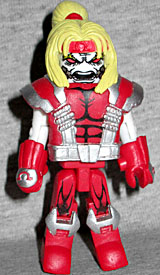 Wolverine, Sabretooth, and Maverick who stole the Carbonadum Synthesizer, a device that was to be used to stabilize Omega Red's mutant powers. He went on to join the KGB and completed many missions before betraying them and eventually being captured/handed over by Sean Cassidy and placed in suspended animation. In recent years, Omega Red was mystically revived by the ninja clan known as, "The Hand."

That may be the longest bio a Minimate has ever had. And the fact that Omega Red is available nowhere but this set is the only reason the terrible Wolverine is selling at all. He's re-created in all his "1990s albino samurai" glory thanks to new pieces: new bootfronts, with his stupid H-shaped kneepads; new gloves, with holes where his tentacles/whips plug in; a new chest cap that's so big they had to give him a Cylon waist extender; new hair that barely fits on his head because his shoulder pads are so huge. The '90s! Catch the wave!

He does include his amazing cardonadium tentacles. 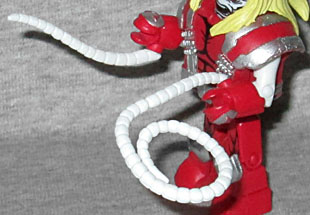 A more maleable form of adamantium, the carbonadium implanted in his system poisoned him, so he had to use his mutant "death factor" (the opposite of a healing factor) to drain the life out of others to sustain himself. So now he's an albino Russian samurai vampire with whips for hands. Can you tell Jim Lee created this guy all by himself? One whip is short and straight, while the other is long enough to curl around in a circle. They're not flexible. Sadly, the coil turns to the outside, not the inside, so he can't grab someone by the neck and hold them up to his own (partially cybernetic) face.

This series of Minimates was released to Toys Я Us in May of 2011 - and you can still find half of it there today (the AoA figures sold out fast, but this set and Big Time Spidey/Shadowland Iron Fist remain plentiful). That's two years the figures have been hanging on shelves, and honestly, I'm pretty sure Wolverine is to blame.