This was the roughest start to the Comic-Con International in San Diego I've yet to endure. The previous nine days I was working on the east the coast and only returned home Wednesday morning at 12:00am. Surprisingly, twelve hours was not enough time to recuperate from over a week on the road AND to prepare for SDCC... who knew? 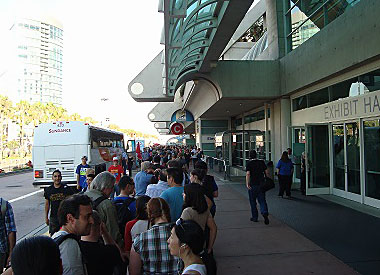 Rather than my hoped for noon departure, it was 3:00pm when I finally got on the infamous 405 freeway heading south. What is normally a two hour trip become a three hour ordeal in Southern Californian traffic. I bypassed my hotel check-in and valuables drop-off heading straight for the Gaslamp Quarter, gateway to nerdom. I found a "new" place to park (and for a reasonable $20, all things considered) then hustled to the Convention Center to stand in a surprisingly long line for Preview Night having already started. Then, finally, after an emergency "3-hours-in-a-car" bathroom break I hit the floor! And 30 minutes later I felt like I'd pretty much seen everything and felt a sense of "being done."

It was a quick tour of the key booths (Hasbro, Bridge, Mattel and NECA) but with few reveals there was no "high," and a quick survey of the all to familiar surroundings left me with a "now what" sense of ennui. Like the embittered trooper I am, I pushed through that wall and continued on the sites and sounds of the other major booths (DST, Sideshow, DC) then the vendor booths and "indie toy" makers.

They've moved the videogames over to the north end of the floor, which makes a lot of sense on a traffic flow level, but from what I can tell many of the familiar vendors from those displaced slots seemed to have disappeared - a real tragedy since several where action figure booths (and one was the phenomenal Geek Chic booth last year). And indeed many of the toy booths that are in play have very little to offer in the way of older stuff, interesting figures or good deals. I did, though, manage to snag a complete set of Mad Monster Party figures and the translucent green Sideshow Creature From The Black Lagoon from one of my favorite booths!

The studio booths seemed surprisingly lackluster this year. The Ice King's head is a great one, but we have battling pirate ships from Black Sails and Once Upon A Time - awkward. This year Walking Dead has replicated a section of the prison while Weta's anchor is Azog. He's pretty cool (though appears to be over-scaled) but is a weak follow up to last year's three troll brothers, I must confess. He's hoping for and expecting Smaug for 2014.

At last, I finally dove into purchasing which always helps cheer up this old materialist. I snagged some exclusives from NECA, then filled several holes in my Minimate collection at AFX and DST before picking up some various other sundries. I waited in Mezco's line at about 8:30 or so only to find out that both exclusive versions of their Creature From The Black Lagoon were sold out entirely! Sorry me, and every non-Preview Night attendee... I guess that's why you don't make only 100 of the most sell-able Universal Movie Monster!

All in all, despite a rocky start it was a good night. Even though I arrived late (for the first time) the efficiency of these guys got me through a quarter-mile long line in about 20 minutes - if only the booths were as effective! No doubt my frustration in arriving affected my mood but once I got into it was a fine time with plenty of shopping to be had! After a solid Preview Night I picked up some Chipotle for dinner then headed to my shockingly-bad hotel a 15 minute drive away. It offers internet at a surcharge, which is ridiculous in this day and age, so my updates will only be as regular as my access to Comic Con "Teen Wolf Free Wifi." Please bear with me. 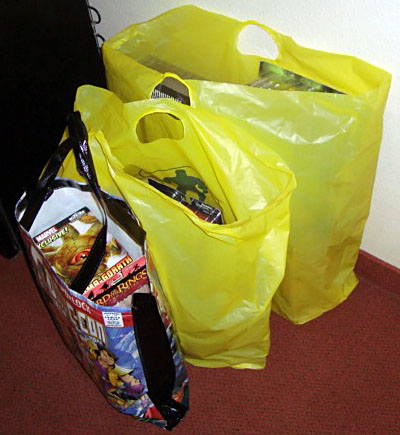 This entry was posted in Hasbro, Mattel, NECA, SDCC and tagged SDCC 2013. Bookmark the permalink.