The first day, proper, of the Con began not dissimilar to the previous one. I'd misjudged my arrival time and between a late departure and a rockin' hunt for parking I made it to the Convention Center at about 9:00am and en route to the line for the Exhibitor Hall was confronted by this raging sea of humanity:

First stop was to inquire about the tickets for the Hasbro booth. I saw no line, and got excited for the briefest of moments before a security guard clarified the situation - not only was the distribution done for the day, the line had been capped at 7:00am. DAMN. Hasbro, Hasbro, Hasbro... you're the new Mattel. Next stop was Graphitti, but they has just finished giving out wristbands. Harumph. Deflated I realized all bets were off, and with such a long line/surging mass waiting for the Hall there was no chance of getting the Gentle Giant exclusives I so hotly desired. At last, the walls were breached and we poured forth on to a foaming-with-life Hall Floor and I lazily headed towards DST. But, then, I realized - screw it, just at least check on Gentle Giant - I can wait in a long line, I got nothing else going on. And thus it was that I got into line before it had even left the booth! About 20-30 minutes later I walked away with not one but all five exclusives I was after, including my Number 1 For the Show: the "Magnitude" Admiral Ackbar! Huzzah! 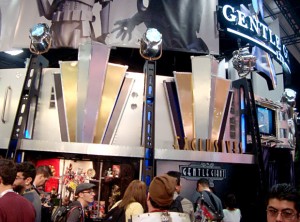 Well, it turns out that $570 worth of resin is darn heavy, especially toting it around in GG's oversized bags, which are too long to be carried without bending your elbows (ALL your muscles are getting taxed) so after another load-up at DST it was back to the car for a drop-off. 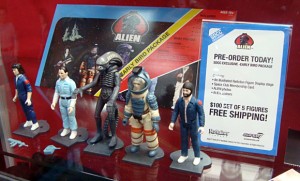 Feeling on a bit of a roll, I decided to hit up the Super7 booth and pre-order my set of Alien Re-Action Figures. Well, they had a long line, snaking through their booth and reaching into the middle of the walkway. Despite there being a regular influx of "no, this is for Funko, right?" line-joiners this was one of the slowest lines I've been in at SDCC. It took just over an hour to pump through 50-75 people. The hurdle was, I believe, the credit card machine (what, wifi connection is rough and inconsistent here!? IMAGINE!) and that they were waiting to collect pre-order info at the front of the line (rather than handing out cards people could fill-out while waiting). By the time I made it to the last hurrah they had a guy going down the line collecting that info, so between that sheet of paper and cash I got my Early Bird mailer and the promise of toys to come (though I received no receipt or confirmation number aside from just the early bird package). I was also told that they were completely sold out of the "test shot" exclusives, and it was only about noon of the first proper day of the con! I'm shocked at the popularity of those, but hopefully this whole frustrating affair means there is a big enough audience that this line could continue on healthily. At Wondercon I was told that Series 2 would be Aliens themed, but personally I would FAR, FAR, FAR rather see them finish off the Nostromo crew (must have Harry Dean Stanton figure!!!!) and a variant of the Alien (solid black dome or all glow-in-the-dark, etc). 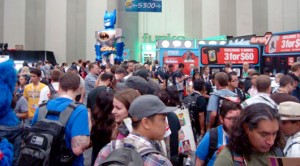 Then it was back to the Weta booth to snag an Azog from the Bridge (one of the coolest exclusives yet - severed head!!!) and even a new Raygun! They have some cool stuff, as always, but I have to say I quite appreciate the new Miniature Hobbit Holes. At $40 they're both affordable and fun. I didn't get one, but I think I certainly end up with at least one in the not too distant future. 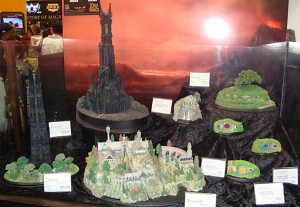 Toynami is still keeping their Futurama line limping along (complete with reissuing a previous over-sized/expensive SDCC exclusive figure paired with a new figure - grumble, grumble) and are now resorting to Kickstarter as a way to make a Morbo. Generally I'm pro-Kickstarter campaigns, but this... not so much. While I want the figures it's pretty hard for me to get behind an established, successful company using that site/system. 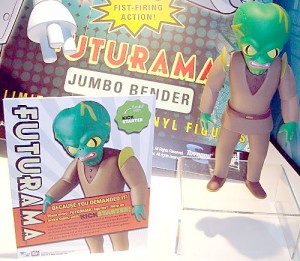 NECA has some really great stuff this year - which is no real surprise. They're arguably the most exciting toy company these days and their Comic-Con reveals and displays are likewise downright cool. Particular highlights there are Jonesy the cat from Alien, the incredible third series of Gremlins 2 Gremlins (please, please, please get released!) and, of course, Series 2 of The Lone Ranger. The best part of the not one but two more versions of each character is that (and Tonto 2 comes from a single shot in the film - WHAT FUN) a guy walking past me as I took photos commented to his friend "hey look, it's the clearance aisle at Toys R Us." And how, sir, and how. The figures are fine, but the movie tanked so hard it's difficult to imagine they could move anything other than the 7" and 18" figures out there now. All snarkiness aside, the booth was fantastic. I, for one, cannot wait for "Heat Vision" Dutch (I'm very serious here)! And good god those 18" Batmen look phenomenal!

I went by the October Toys and got my blue and yellow OMFGs and Dead Beets, then cruised about the rest of the affair aimlessly. Mixed in during the day were two panels: Teenage Mutant Ninja Turtles: Action Figure Showcase and DC Collectibles.

After a full day of the show it was over to the Marriott next door to hunt for power for the old phone and laptop while I typed up the Day 1 report. After grabbing some food and making a purchase-dump at the car I swung by DST's Opening Night party for the 10th Anniversary "museum" at a local bar. It was a pretty swinging affair with many familiar faces from the industry hanging out. It was a neat gathering but I must confess I didn't stay too long, I'm not much of a "bar person" so the abject noise was bit too much for my ever so delicate constitution. And thus it was that I left for "home" (a slummy hotel overcharging me by triple in a sketchy neighborhood) and slept my ass off in anticipation of an early start the following morning. 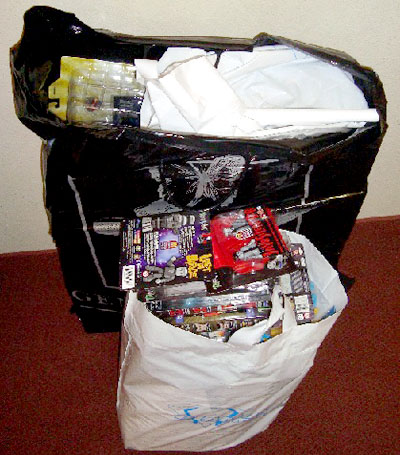