What a morning - I walked in to see nothing but an "End of Line" sign at the Hasbro ticket distribution table. I was able to walk right up and get a ticket with absolutely zero wait! Before I left I had to ask one of the attendants "what went right" today? He had heard that both the Magic the Gathering set and Boba Fett had sold out entirely. Well... that would do it... we shall see though. And on that note... it was promptly into the Hall entry queue so that I could make yet another go of it. 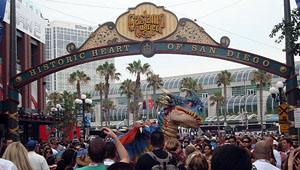 Well, that beginning was nothing but a false positive because as soon as I hit the floor I found nothing but impossible lines for EVERYTHING. Booths that never even had lines before now had queues overflowing and filling aisles - it was absolutely nuts! Every booth I tried either had a capped line or were sold out of the thing I was after and it wasn't even 10am yet. Resigned to failure I began the ever-common, aimless stroll about the floor until the panels I was into began later that day.

I went off to The Bridge Direct's booth to gander once more the new Hobbit figures. I sadly don't recall exactly how the 4" figures are going to be released as I'm pretty confused since it seems to change every couple months. I can tell you this, the two-packs and beast packs are dead and it sounds like the multi-packs are just a way to refresh Series 1 items and will not include exclusive figures. Thrandruil and Radagast will definitely be available on single cards, and presumably so will the remaining dwarves - I'm very pleased we'll be able to complete the team! Over on the 6" line we'll be getting Bolg, Radagast, Yazneg and Azog along with a re-released Legolas. Famously, Tauriel and Legolas were meant to be in the first film when there were only two movies, but they'd switched to three films after the figures had gone into production and thus we had those two figures though they didn't appear in the film. What's more is that the studio wanted Bridge to pull the cases, which were being shipped, and remove those characters... obviously Bridge said "no way." I did overhear one the Bridge folks tell someone else that the first series was pretty limited - only about 12,000 were made (presumably of each figure). They also confirmed that the 6" line was by far the strongest seller, and assumed it's because it was a collector-driven property and most collectors wanted the line that fit in with their Lord of the Rings collection. I did ask about a Smaug - he'll happen, and be in the 4" scale, or at least that line, but won't come out until next year simply because they don't know what he looks like. All they've seen is what's been shown to the public so far! Yikes... that's some real quality film-making/synergy at work there, Pete.

One of the things that I really loved about NECA's booth was that they'd re-pose the Adam West Batman every day which really showed off how awesome that figure was. Today they had him in an incredible "cape out" pose so amazingly cool that it is going to be a really tough battle between him and Dutch for Toy of the Year. 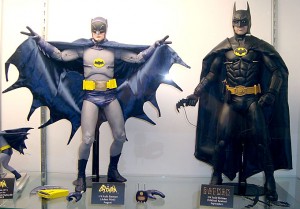 Dark Horse is answering the call of fans for Game of Thrones action figures with a line of remarkably mediocre offerings. The two they showed were a pretty good Daenerys and a lackluster John Snow, which is just their statue of him scaled down and with less detail. Clearly I'm none to impressed and am happy to sit this line out as yet another company attempts a product category they don't understand. 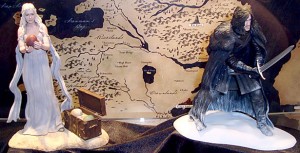 I made it to only three panels today:

Marvel Minimates: Ten Years of Awesomeness
Hasbro: Marvel
The Art of Play: How the '90s Changed Action Figures from Toys to Collectibles

I had wanted to check out the "Hellboy: 20th Anniversary" and "Brickjournal" ones (and even the "Spotlight on Leonard Maltin"), but alas had to use those chunks of time for Hasbro and Mattel exclusives. That morning I'd gotten a "return after 2pm" ticket and faced with the inevitable and expected SOLD OUT sign on "Boba Fett & Han in Carbonite," not to mention the Magic the Gathering deck (I had no idea Magic was even really a "thing" anymore, but I did have a couple friends ask me to try and get that for them, so there you go). The Fett nightmare is... it's just a whole pile of insanity. There isn't a single thing about it that was ever a "good idea" so I'm not surprised it was a mess, but I was ragingly shocked at how huge of a debacle it was. And, from the sounds of it, Mattel was none the better. I've been doing the pre-order there ever since they started that, but I overheard lots of gripes about their line (the Weberella from Monsters High was apparently almost as bad as Boba Fett) and far more about their pre-order pick up. I had gone by twice before in the week, but had noted an atypically long line the first and then came during their multi-hour mid-day "break" when they were closed. This time, I got in a longer-than-normal line and was done and out there within 30 minutes or so, but the women behind me in line were telling me they'd been there the previous day and waited THREE HOURS and only moved 30 FEET!!! I'd heard similar things elsewhere and can not conceive of what the problem was since it's always been efficient in my experience. 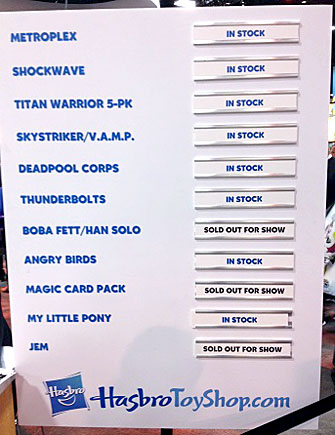 I also had a passing interest in the Metallic Paint exclusive version of Funko's Skeletor Bobblehead but with the bedlam of that booth had written its ownership off. Well, I decided I'd swing by in the late afternoon and see how they were doing and was, indeed, confronted with mostly barren shelves. But, among the few remaining stragglers sat four of the Skeletor Bobbleheads! So there's another happy story. Funko is at its best when they're a painless novelty purchase and that's entirely what I ended up with and am quite pleased as a result.

After the final panel I went to meet an old friend from college for dinner before heading back to the Convention Center for the Masquerade. Well... after five hours it was perfectly clear that not only had we missed the Masquerade but it was damn late and time to head back to our respective hotels for some packing up before checking out in the morning.

This has been a rough Con for me, but Saturday was the first time I started to not hate it. Sure I'll never, EVER, EVER, EVER have Han Solo in Carbonite but I was able to get quite literally everything else on my list. Plus, not only having a buddy for once on this trip, let alone a great, long dinner with a good friend, really helped pick up my sagging spirits. So... Saturday was a good day, after all. 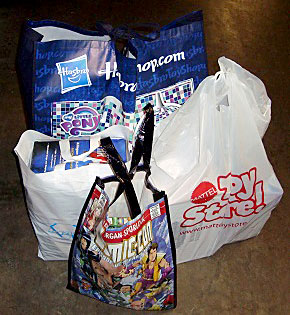