In May 2011, Toys Я Us ran a poll on their website allowing fans to vote on what four figures they wanted to see in an upcoming four-pack. And the winners are... 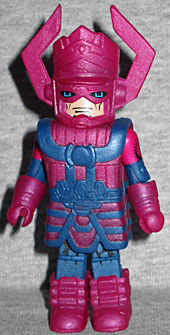 Sole survivor of the universe existing before the Big Bang, Galactus, Devourer of Worlds, is perhaps the most feared being in the cosmos! He comes with a tiny Minimate of the Silver Surfer, his first herald.

Uh, yes, he does... but does that really belong in the bio box on the back of the packaging? Like the Sentinels, Galactus was released as a statue years ago, but this is his first actual Minimate. There's a normal body at the core of the figure, but the boots, gloves, helmet and dress are all new pieces, molded from mildly translucent purple plastic to give them a shine. He also has a waist extender to give him some more height. The new pieces all have sculpted details, not painted, but the depth is shallow enough that it doesn't look out of place on the Minimate body. Not a lot of potential for re-use unless they want to do the Venom-possessed or Marvel Zombies versions of him.

Galactus' helmet is removable, showing us the face beneath. It's long been established that every race that views Galactus sees him differently, so a Skrull (for instance) wouldn't see the big purple and blue gladiator. The face we see here was originally revealed in a 1982 issue of Hercules. He's got black... hair? Skullcap? And blank white eyes.

And of course, there's the mini Silver Surfer mentioned 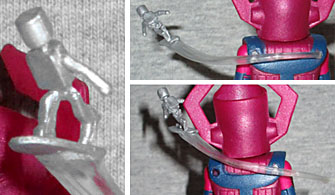 in the bio. It's a single, unmoving piece, cast from translucent plastic and then given a silver paint app on the figure and his board. The clear plastic iss used to create a "swoosh" flight path for him, so he appears to be flying. There are two holes in the back of Galactus' shoulders that the swoosh plugs into - at least, in theory. One of the pegs on the swoosh does not want to stay in place, constantly popping out. It still stays in place, though, and is still a really clever idea.

Tyros was once dictator of the city Lanlak on the planet Siri, 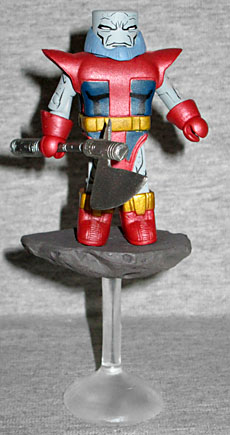 where his ability to control rocks and earth gave him absolute power. Before making Tyros his herald, Galactus had him take on the Fantastic Four.

Terrax was Galactus' fourth herald, after Silver Surfer, Air-Walker and Firelord. He was also the most successful, finding more consumable worlds for Galactus than anyone else. This Minimate not only gets new boots, a new loincloth/belt and a new chest cap (in addition to the glove flares that several Captains America and Greens Goblin have had), he also gets a new beard! Terrax is bald with a big beard, and rather than just paint it on, they have a normal Minimate head sit down inside a ring to create it. That was the right way to go! He's armed with his big, wicked axe, and comes with a stony base to stand on - and since he basically had Earthbender powers (such as being able to make rocks fly), the set includes one of the clear flight stands, so his rocky base can hover menacingly above the heads of his enemies.

Morg was the executioner on the medieval world of Caraner, until the world devourer Galactus consumed it. He opposed Galactus, but the world-devourer 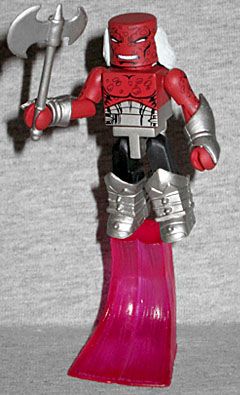 made the ruthless Morg his herald instead of destroying him.

Morg is ultra-90s: a stupid name that's just a normal word misspelled, a "costume" that's really just a lot of metal and spikes, and an attitude meaner than those that went before him. He also breaks the elemental pattern of the other heralds: you had water, air, fire, stone, fire again, and then... chopping? Although he's got the Hulk Hogan-style combo of "long hair" and "bald," AA didn't reuse the BttF Doc Brown head for this figure - instead, his hair is actually attached to a ring around his neck, and just rises up to look like it's coming off the head. Neat!

Morg's skin is brick red, his hair is white, his pants are black and his armor is all silver - that includes new spiky boots and new forearm guards. He's wielding his axe and comes with a translucent purple two-footed flight stand. However, his new boots keep him from putting his feet together, so he has to hang off the side a bit. Plus the hole in his foot is too shallow for the peg. 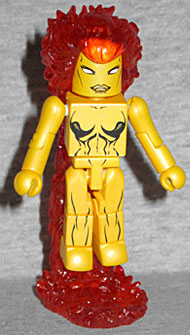 Exposed to chemicals as a child, Frankie Raye was afraid of fire for years, until a mental block was lifted and she gained powers similar to the Human Torch. She later volunteered to become the herald of Galactus.

Frankie not only got powers like the Human Torch, she used to sleep with him. Hung around so much that the Fantastic Four considered becoming the Fantastic Five, in fact. Then she volunteered to be Galactus's fifth herald, and left her old Earth life behind. This Minimate is done in a slightly shiny yellow, which is perfect for the character. Her torso and legs are detailed with black paint, and she gets a new head that's molded with the V-shaped forehead she's always drawn with in the comics. 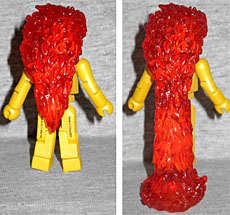 She's also drawn with giant flaming hair, and this toy delivers that, as well. This is really something they should have done for Starfire back when they had the DC license (since she had the same hair gimmick). It reaches down to her butt, but it also sticks out too far over her forehead - it hides the spikes. The lower tip of the hair is removable, so you can plug in the included flame base. Yes, Nova can actually hover on a plume of her own flame! Awesome sauce!