In today's review of Krang, yo mentioned that Playmates had several other options for the evil brain's body. Here, via Steve Lavigne, are two of those rejected designs: 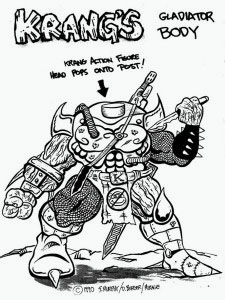 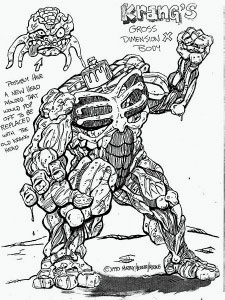 Now why weren't those ever approved/produced? Kids would have eaten that up!

As a bonus, the cartoon may have showed what Krang looked like in his native form: a 1993 episode, "Invasion of the Kranganoids," saw Krang so frustrated at his existing henchmen that he cloned himself six times. Initially, the clones were just brains, like him, though they soon began to grow big, lizard-like bodies. 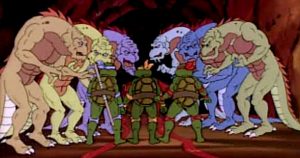 There was no mention of anything going wrong with the cloning process, and Donatello even points out that some lizards can regrow lost bodyparts and speculates that's what's happening here, so it's likely that's his species' natural appearance.

This entry was posted in addendums, cancelled toys and tagged TMNT. Bookmark the permalink.