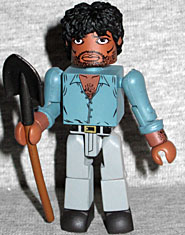 After his wife died, Morgan and his son Duane hid out in the house next door to Rick's, informing a newly awoken Rick about the plague. When next they met, Duane had been infected, and Morgan was not the man he once was.

Though I remembered Morgan's role in the comics, I forgot his name - so when this Minimate came out, I didn't know who he was supposed to be. If not for the shaggy hair (not the same piece Beyonder used, surprisingly enough), he could almost pass for Lee Everett, the main character of the Walking Dead videogame; even the rolled-sleeve blue shirt and the tan/gray pants are the same!

while she was out gathering supplies. To keep him close, and to shield her from zombies, Michonne brought a chained Mike (and his friend Terry) out on the road.

Yes, this is one of Michonne's pet zombies. How crazy is it that the only way to get such an iconic character is in a Toys R Us two-pack? Shouldn't they have been more readily available? Like a three-pack or something? Mike is barefoot and pregnant shirtless. And also armless. The pack includes arms you can give him, but why would you want to? He has meaty bits that fit over his shoulder pegs, and his torso is painted with exposed ribs on the left side. He has no jaw, but that's just an effect of the paint, not a new head. The chain linked to his neck is real metal.