Welcome.... TO SELECTASTROPHE I!!! I figured I've done one, two, three Legomageddons so it's time to branch out to other disasterous high volume collections. In our inaugural edition for all things from DST's "Select" brand we'll look at the eight figures I got from their various lines while at 2013's San Diego Comic Convention. 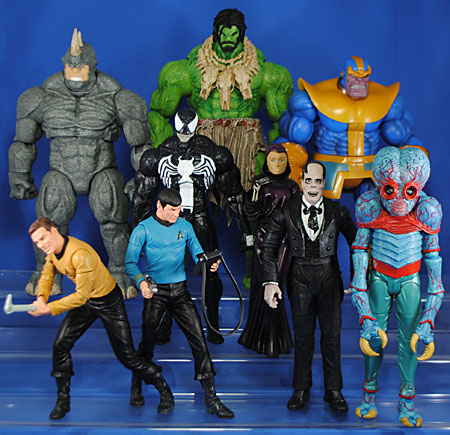 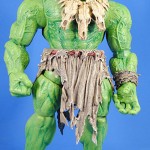 I am in love with the Disney Store exclusive Hulk that shares much of this figure's parts so I was very much looking forward to this guy. This is yet another phenomenal sculpt by master Jean St.Jean! I love texture and detail and this guy is rife with it. He has 16 points of articulation and all work great. The paint is equally good, too. His skirt and necklace are separate rubber pieces and look great too. under the skirt is the same ripped jeans waist piece as the Disney Store version but painted brown and I was weirdly very surprised to find the under-side of the skulls sculpted too - I guess I've just become too accustomed to cost cutting in the mainstream these days. The Marvel Select line is at its best when it comes to large figures and this 9" tall guy is definitely that! Here's hoping for an Ultimate Hulk vs. Wolverine variant with that distinctive "rural" look as well! 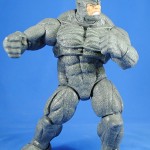 Rhinocerii are my favorite land animal so it would only stand to reason that Rhino is one of my favorite villains! I don't think I've ever read a story with him, but that doesn't matter - he just looks so cool! Sculpturally this is my favorite figure of Rhino ever produced. He's big, bulky and textured to hell and back and has the pseudo-plating of the actual animal. The paint is really good too, simple but effective. The one place where this guy looses points, though, is articulation. The ankles are pretty groovy (hinge+swivel+rockers) neck is very limited in range and the torso balljoint could go further to reproduce his iconic "ramming speed" pose but the real problem here is lack of thigh swivels. Still though, he's a beautiful figure and DST has definitely raised the bar for this character. It's unlikely anyone will ever come as close (at least in this 6"-8" scale). 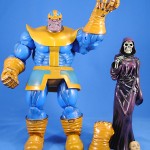 After seeing The Avengers I picked up and read Infinity Gauntlet finally which launched me on a quest to get this figure. He comes with plenty of articulation to boot, though it can be a restricted by his bulk, alas. Though this figure isn't that old his smooth, sleek sculpt feels outdated. He gets the necessary interchangeable left hands, but sadly between the sculpt/pose and elbow articulation it's pretty hard to find a natural pose to show of the Infinity Gems (which are also a little too darkly colored). What really sets this guy apart, though, is his pack-in: Death! She's a non-articulated 6¾", but who cares - they made the love of his life!!! She even comes with a removable "mask" of her human face, but sadly the edges have just enough excess plain skin for it to look pretty unnatural. Besides, how cool is the cloaked skeleton anyway? This is essentially a must-have figure - there's no other version of the character in this scale and I'm hard pressed to imagine anyone else will ever make a version of Death from the book as well! 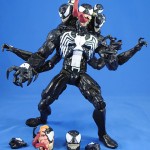 I must confess that I was a little bummed this figure wasn't getting a base in lieu of the alternate pieces, because I'm a "can't decide which version to display" kind of guy so I have a nagging urge to get multiples of this figure. Because Jean St.Jean is awesome those little Madness heads use the same balljoint as his main head so they can act as alternates too! The largest of them looks the best and creates a damn cool "Smart Hulk" look, if that's your bag. I was worried about the pegholes in the forearms for the extra arms but due to the blackness of the figure they're barely noticeable. I have never understood the fascination with "mid transformation" heads on Venom figures so while this is a good sculpt it doesn't do much for me. The "tongue head" is okay, though the teeth are just kind of weird. I'm also none too big on long-tongue Venom and it's damn cool that it's removable as well. The real star here is the McFarlane head. There is something funny about McFarlane's former head sculptor doing something based on Todd's art for another company, but there you go. The only downside to this figure is it came out of the package kind of sticky and oily, not unlike an old figure that's been in the attic for a decade. Regardless, I knew I'd like this figure but I was surprised by just how cool it did turn out - EVERY figure should be this intelligently designed! 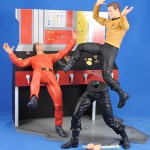 I've been looking forward to these figures for a while now as they are not only Star Trek but also something innovative and new! They create iconic moments from The Original Series favoring interchangeable parts in lieu of articulation. It's a bold new direction for the articulation crazed industry of the last decade but it is a welcome breath of fresh air! This set comes to us from Space Seed and includes a non-articulated Khan figure to be beat up by Kirk! The base is a bit of Engineering, a new area to the world of toys, and they include a cardboard piece for the back wall which brilliantly has different graphics on each side adding value to those of us who will double up. Kirk comes with alternate grab-y hands and "engineering rod" holding hands (I think the hands are glued on to the rod, oddly). He also gets a clear rod which plugs into his leg and to the base allowing him to hover in, yes, the FIRST EVER collectible to bring us KIRK-FU!!! That is reason enough to get this set! Watch the show! Picard uses his mind and Kirk uses his feet - it's hilarious/awesome! He gets alternate lunging legs too, plus his waist uses the same peg/socket as Spock allowing one to share the legs and hands between both figures - too cool! The only downside is the paint on the skin - it's too peach-y and the face details are a little rough. Also, it would have been nice if Khan was given basic swivel joints since he is several separate pieces glued together. Still though I will most be getting a second one! 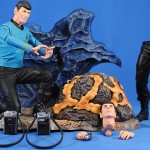 And this guy comes from the classic episode in which Spock talks to a rock! This is a completely oddball choice but a brilliant one none the less as we now have a toys of the Horta. It's not removable from the base and while it does have a removable piece of its exterior, that piece doesn't stay on too well. The base, though, is a very cool piece with a great sculpt and paint, though it's so think the plastic came out warped a bit on mine. Spock here gets a ton of extras - an alternate grimacing head, alternate mindmeld and griping hands, a phaser, and two tricoders, including the first ever toy of an open tricorder (here's hoping for a fully closed one in the future). Thanks to the interchangeable heads I've discovered that the necks have a hinge joint in them, but they ride so low in the shirt it seems like they're just swivel joints. A simple, hearty tug on Kirk and/or Spock's head gets them out enough to take advantage of that - very important for the Toys R Us exclusive versions. There are two sets of pegholes on the base for both pairs of legs but sadly the ones for the kneeling legs are far enough back that Spock can't actually touch the Horta. These are great figures and an awesome new direction for Trek! I hope they do really well and that DST isn't put off by the failure of the disappointing Picard figure. This is a great why to breath life into the license and to get us some characters that are missing from the original line while delivering fun new twists one the crew! I'm hoping for McCoy/the Salt Vampire from "The Man Trap" and Scotty/Koloth from "The Trouble with Tribbles"! 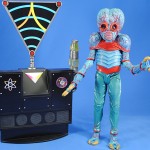 This figure is identical to the TRU exclusive version so it's the base that makes him unique, and it sure is a hell of a cool base at that! The Interocitor is a awesomely simple design from the height of the '50s sci-fi aesthetic. The paint is clean and crisp and I really dig the translucent "transistors" on it. It does have one flaw, though, and that's a hexagonal peghole that's not aligned to the front of the base, meaning the triangle shaped monitor is forever twisted slightly to one side. I'm not sure if this is accurate to the movie or not but it definitely "feels" odd as a toy. The Mutant is a really cool figure, also sculpted by Jean St.Jean, and he's loaded with articulation and coated in cool, metallic paints. The Mutant was never really a "proper" Universal Monster until Sideshow added it to their awesome 8" line a decade ago and this version is another fine improvement on that older one. 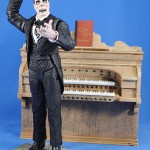 Here we get the classic Phantom as iconicly portrayed by the genius Lon Chaney (seriously, guys - you need to see his work, it transcends silent film. His Hunchback of Notre Dame is incredible)! It's a really good figure, but there is something a bit "soft" to the details proportions that make him not as strong as some of the other entries in this line. He comes with a little stone base, and alternate left hand (presumably for the famous "revealed" pose) and most importantly his organ (no, you dirty minded so-and-sos... the playable kind. No wait... a pipe organ. I mean... it's like a piano... you know what I mean, damn it). It difficult to recreate the pose for this guy without double-hinged elbows so if it's not for that pose then I'm not sure really why there is an alternate hand. All in all this is the must-have version of the character - he's unmasked and he comes with the organ, but after the nearly insane volume of extras that came with the TRU version this does feel somewhat lackluster, I must confess.

This entry was posted in Rustin's Spoils of the Week and tagged Marvel Select, SDCC 2013, Spider-Man, Star Trek, Universal Monsters. Bookmark the permalink.

8 Responses to Rustin's Spoils of the Week #114