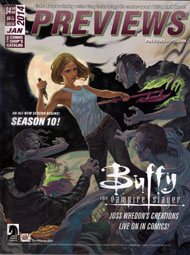 Page 168 has Rabbit Hole Batman, a figure that looks like nothing you've ever seen before.

According to page 254, Daryl Dixon's motorcycle is no longer going to have SS symbols on it.

There's a T-shirt featuring an 8-but rendition of Megatron on page 424.

Page 443 has Series 5 of the Walking Dead Minimates, and page 445 has Amazing Spider-Man 2.

The 30th Anniversary Voltron on page 452 is expensive, but it looks amazing.

There's a new series of 6" Avengers toys? That's news. They're on page 455 along with some Marvel Universe listings and a Captain America Potato Head.

If Transformers fans can't find Rhinox and Whirl, they can order them on page 458.