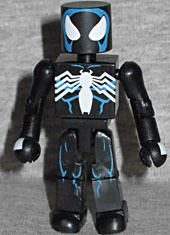 Most of New York City sees Spider-Man as a threat or a menace, and the police are no different. While many appreciate the assist, just as many think Spider-Man is no better than the thugs he helps put away.

Look, it's a Black Spider-Man! Like Back in Black Spider-Man, this one's costume is just a costume, not an alien symbiote, leaving you to wonder why he'd willingly dress like a terrifying monster. This one doesn't get a removable mask, but he does have blue detailing for his anatomy and the white spider legs go all the way around his torso block. He comes with the webline that many other Spidey Minimates have had before him.

Police Captain DeWolff was one of Spider-Man's few friends on the force, 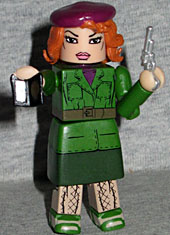 keeping other cops off his back and occasionally helping him out against super-foes. If only Spider-Man had been nearby when she needed him the most.

Marvel Minimates Series 43 is based on "The Death of Jean DeWolff," so spoilers: the story probably doesn't turn out too well for her. She'd been around for about a decade, but the editor wanted to kill her off as a way to shake up readers. She's got a very 1970s fashion sense, with a green overcoat, a purple beret, green skirt, fishnet stockings and strappy high heels - not exactly standard police wear. She's armed with a revolver from the Good, the Bad and the Ugly set, and has a new hand that allows her to flash her badge.