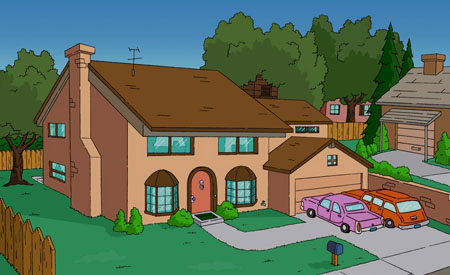 I also said the toy's layout barely matches the real thing at all. Don't believe me? Read on.

Here's a plan of the first floor:

So for the Lego set, the garage enters the house in the wrong direction; the living room (where they have parties) and the den (where they sit to watch TV) have been combined into one; the exit to the backyard is in the kitchen, which itself only has one door to the rest of the house; the staircase is up against the wrong side of the wall; and the rumpus room, hallway, and dining room don't even exist. Basically, it's like all the rooms they did make have had their relative positions rotated 180° within the house.

And it's even worse upstairs:

The parents' bedroom and Bart's room are in the right places, more or less, but that's it. The two mystery rooms are the ones that would go over the garage, if Lego had made that part of the house, and the foyer should be two stories tall. And that's to say nothing of the attic we've seen many times over the years.

For more specific info on each of the rooms and what should or shouldn't be in them, visit the Simpsons Archive. That's where we got these maps, but there are more detailed ones there. The short version is, the Lego house needs a lot of work if you want it to be accurate.

Here's a fancier version, which repositions a few things (though I'm pretty sure the placement of the upstairs bathroom is still wrong - if Bart flushing the water in the kids' bathroom makes Homer's shower change temperature, they probably share a wall): 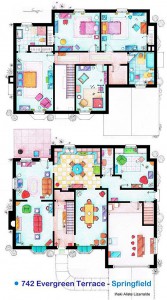 This entry was posted in addendums, Lego, videos and tagged Simpsons. Bookmark the permalink.