This week I got super lucky when visiting a Toys R Us I don't normally go to as they had everything I was hunting for but unable to find elsewhere! So, with the exception of the Lego car and Thor this is ostensibly "Spoils of that one TRU." Let us begin, won't you? 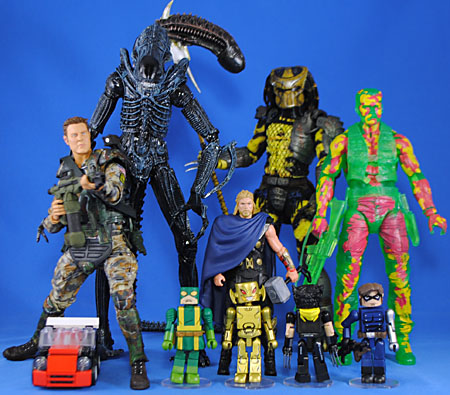 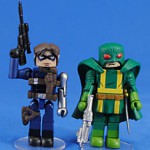 Another carry-over from Series 54 here we get the battle building Hydra Elite. The cowl and cape on him are a little too hokey for me, but since both are removable this guy makes for a fantastic Hydra Soldier which is a definite improvement over the original one from Series 29. I really, really, like that DST gives you these costume options, particularly on the battle builders. The other character here is Winter Soldier but unlike his Series 54 counterpart this Buck "don't call me Bucky" Barnes gets short hair, not-evil face and a blue outfit. That is an excellent choice and is the main reason I ended up getting this set - both figures are worth having: one has alternate looks and the other is unique. this is the way it's done, DST, well done. I just wish they'd done the same thing with Falcon to justify "all in" buyers to get that set as well. 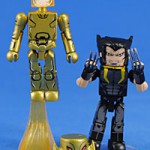 Here we get the other exclusive for TRU Series 18, and it... is annoying. No doubt meant to complete the "Age of Ultron" box set we get a pretty good battle builder packed with our 53rd Wolverine. Ugh... WHO CARES. Wolverine overdose. At least it's a costume that's "different enough" but he's unmasked (yawn) and come with a pulled-down hood in bright yellow. So this is "Hoodie Wolverine"... One the plus side is the golden Ultron Drone who turned out pretty cool. Beautiful paint and a neat head piece. He gets a sculpted "belt," a trans-orange flight stand and a pretty neat (but confusing as I haven't read the story) trans-ornage head with Ultron face painted on it in white. So... we get a cool battle builder and a boring retread. Get pairing, guys. I guess that's the one plus of the exclusives being under-packed... there's no reason to buy multiples since no one needs dupes of "Hoodie Logan." 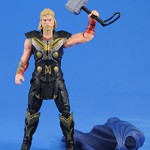 It dawned on me that I never got around to picking up any Thor: The Dark World figures beyond the mind-numbingly awesome Dark Elf so I set out to rectify that but lamented to find that Hasbro had finally figured out their shipping volumes for once and that the figures had disappeared post-Christmas. Well, swoop in a random find at a TRU to deliver the exact figure I was looking for. It succeeds it really making this guy stand out from all the other figures and gives him a nice causal feel while also concealing yet another needless armor redesign. Best of all it allows me to reenact the "Thor and Loki walk down the hall" scene which is the only good thing about Thor 2 (seriously! because of spoilers). The sculpt is pretty good, the paint is solid and the articulation is plentiful. It's really a shame... I wish the movie was half as good as the toys. 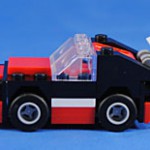 A brand new polybag in Target's Easter section delivers my least favorite thing - a car. I got it because... well... I guess that's just what I do. It's looks nice enough for what it is; the red accents help a lot as does the white spoiler. The top of it has an "unfinished" feel to it but all in all this is a great thing for its target audience. If your kid likes Legos they'll like pushing this around. Otherwise there are a decent enough volume of bricks to make me not totally bummed for having bought this. 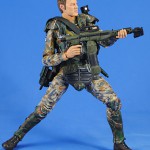 Okay, this one is a little tricky for me. The figure follows the format established with Series 1 and is basically an upgrade of that Hudson. It replaces his pulse rifle with a flame thrower, and his bare with new fully-sleaved ones. The flame thrower is a fantastic piece and quite a welcome addition to the line. The only problem with this gun though is the figure's right hand which is sculpted in a downward slant meaning you have to get a little elaborate in posing to have him aim the gun directly forward (and it's nearly impossible for him to aim it upwards). I'm really annoyed by the inclusion of the motion tracker accessory, which had been billed as exclusive to Series 1 Hudson. The story goes that 'at the last minute' an actor's likeness rights fell through leaving NECA with this figure completed but without a head (Al Mathew's Sgt. Apone was that guy, or at least the most likely candidate) so they made this cool tribute to Tankman's brother. However, the figure feels a bit out of place not being from the film. This figure would have been much better served had he included the helmet. It'd be much easier to blend him in as an army builder that way and it would feel more exclusive/unique as the only single-carded Marine with a helmet. And I really wish they'd sculpted a new right hand that could hold the gun at a more realistic angle (or double-jointed the elbows for the same reason). 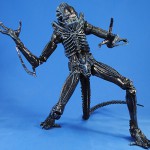 A simple repaint of the Xeno from Series 1 it now has a blue drybrush/wash over the black plastic to provide the other side of the perceived coloring. My feelings remain the same - this is a good figure but not a great one. The proportions are little too idealized for me - limbs long and skinny, torso squat and thick, neck nearly non-existent. The tons of articulated joints all move very well but I still can't find a pose that I like in which this guy can remain standing without, at best, using the tail to tripod. My biggest issue though, really, is this the paint - the coloring is just so heavy and rough. For a company that achieve some really great subtle work it's a little surprising and a little disappointing (the paint is much more prevalent in person than in photos). I'm still keeping my fingers crossed for one final repaint, though. Glossy black plastic with flat black drybrush. I had thought that's what we were getting in the Genocide 2-pack but that black Warrior has a bronze-ish coloring that makes him look surprisingly similar to the tan Alien from Series 1. Aaaaaanyways... Xeno's are fairly awesome and this is a good way to pad out the pack. 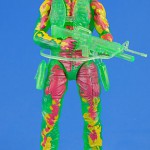 This is a straight-up repaint of Jungle Encounter Dutch (vest + no shirt) which is a pretty solid choice. I do kind of wish they did full "thermal" paint on his chest rather than following the shape of the vest so that there be some more options. The paint is excellent though, wonderfully simple "soft" red and yellow in an almost Picasso-ish pattern - it replicates the look quite well. What is weird though is that the paint is opaque while the plastic is translucent. I had imagined this to use translucent plastic but had hoped/expected the yellow and red to use some of the modern technological advances that allows for multiple colors to be mixed and cast simultaneously. Total consistency of placement would have been unlikely but the look would have been very striking and unique. They could also have gone the DST/Minimate route and cast it in clear plastic then used translucent paint to get the look. Ultimately though this is a very cool, very unique figure in any collection and I like it quite a lot. I just think it could have been even better. 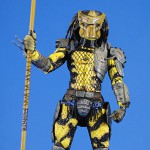 Man, the Predator figures just seem to keep getting better and better and it's chiefly the paint that's doing it. Sculpturally this guy is just a kitbash or maybe a couple new but very familiar accoutrements. This figure is gorgeous, though, to look at because the paint is both so rich and so clean. The big surprise here is that the yellow is paint rather than unpainted, colored plastic as with most Predators and it is a staunch reminder of much better paint looks than plastic. He has two little bits of blue on his loin-coverings and they really pop too; the blue/black/yellow scheme has a sort of Monarch Butterfly quality to it. The mask is cool but I'm of a mixed mind on it since it didn't appear in the actual Dead End film though it does look more interesting than another mask-less predator (I do think mask-less would have helped Big Red stand-out a bit more in the trip). As if the good looking paint and novelty of completing the Dead End trio wasn't enough, Wasp gets a must-have accessory of a neat spear with an impaled Xeno-Warrior head. This is another great release from NECA that manages to really fire on all cylinders when most lines would be running out of steam by the 11th series.

5 Responses to Rustin's Spoils of the Week #124