Injected with a super-soldier formula during World War II, Steve Rogers used his enhanced strength and agility to fight for the Allies until his plane 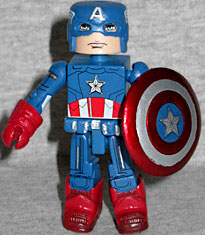 crashed in the Arctic Ocean and he was frozen in the ice. Thawed out 70 years later, he was asked to serve his country once again as part of the Avenger Initiative.

The Avengers Cap costume wasn't as good as the one in his solo movie, but it looks better in Minimate form than it did on screen. It does look very comicbook-y here, with red and white stripes around the waist, wings painted on his temples, and red boots and gloves. The star on his chest is silver, matching the stripes on his shoulders and the zipper on his stomach. There are also white patches on the inside of his arms, but they should be on the upper arms, not the lower. The gloves, boots, belt and mask are new molds, and his shield can plug onto the left arm. If you choose to remove his mask, the figure includes the same hair all the other movie Caps have had.

Banished to Midgard (Earth) for his recklessness, the hammer-wielding 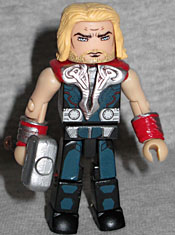 God of Thunder returned to his home of Asgard to protect it from the machinations of his adopted brother Loki. Believed dead, Loki's re-appearance on Earth bodes ill for humanity, and Thor joins the Avengers to stop his nefarious plan.

Thor's costume in Avengers, meanwhile, was only minorly tweaked from his own movie - bare arms, different bracers, simpler boots, etc. The chest armor was the same basic shape, and instead of simply being painted on, this time it's a part of the same shoulder cap that gives him just a little bit of cape. It's a neat idea that makes him look armored, but not overly bulky. He doesn't have a helmet, just beautiful blond hair, and he comes with the same Mjolnir as the other Thors.
Previous|Next