Last summer I had the improbable good fortune to make a return trip Florida's Playmobil Fun Park which, of course, means I made an exceptional volume of purchases. One of the very greatest things about the Fun Park is that it features a wall of Add-Ons, these are various Playmobil elements polybagged and sold directly from Playmobil as a way to plus up your display - it's essentially the Playmobil equivalent of the Pick-a-Brick wall at Lego Stores, and indeed there is no stopping me from going nuts with it! Thus, below follows a minor cavalcade of the several pieces I got to fill in the holes in yon collection. 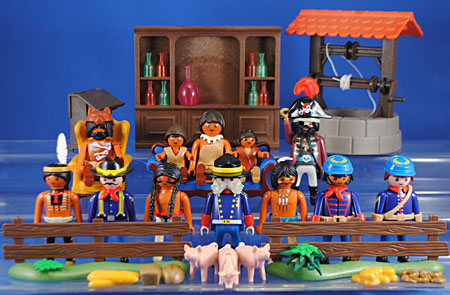 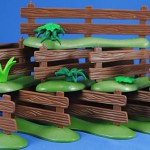 Surely the most pedestrian of my purchases but one can never truly underestimate the value of atmosphere elements like these. I got two sets, each contains six fences - the fences are identical but three have basic ground bases while three have bases with a plug for some vegetation. It's a great to have some variation between them all. I do wish that the individual fences had some way to "inter-lock" beyond just placing them next to each other but this is good enough. I'd really, really like to seem them do a run of these with yellow/sand bases (and perhaps gray for the fences) to fit in with the Western and Safari themes, but these ones are pretty versatile as is. 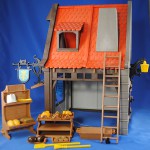 STECK!!! So, up until around 2000 Playmobil had this amazing system called "Steck" for their buildings which essentially was a universal system of teeth and sockets along the edges of of the walls which let you both build the intended layout but also reconfigure to your heart's content (this is how some folks have been able to build insanely awesome giant castles with Playmobil), but for whatever reason they replaced that with the awful, fake-Lego "System-X" and have subsequently phased out most of the reconfigurability of the castles and such. Thus, any time a Steck piece get released it is a thing to cheer and is what allowed me to get my first medieval building - the Bakery! It's a great set that comes with a bunch of bread types plus a high shelf, a low shelf, two trays, a trough, a ladder (to get to the second story loft), a baker's hat, a broom and a long-handled paddle for getting the fresh bread out of the sadly not-included oven. The building also comes with a unique wall with an opening flap to vend their wares. On that same side is two hanging signs, one with an unfamiliar symbol and the other in German so presumably these are bakery advertisements. And thus, my medieval village is begun! I have many more store types and Steck elements to collect so we'll see how far I can get, but this is definitely a great start. 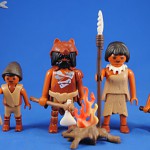 Another great type of Add-On are figure, aka Klickie, packs and this is an excellent Stone Age Family one! The store was having a big sale on the sadly discontinued Stone Age line so I picked this up to compliment those. Here we get a Mom, Dad and two kids in the darker skin tone plus a bevy of accessories. Most, if not all, of the Stone Age sets in this skin color only include men which makes this woman exceptionally important for the collection and now that I realize that I need to get at least one more of these sets. The kids are pretty great too, and one of them gets a little cap to wear which reminds me a whole lot of the purported Yeti Scalp Tibetan monks have (as featured on the old In Search Of show). I also love the bone tools/weapons these guys get a whole hell of a lot! This is absolutely Playmobil at its very best! 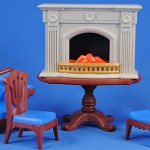 I have been lusting after this furniture since it was first released in the mid '90s! It was designed for the first release of the Victorian "Dollhouse" and just looks so incredibly cool! You get a fancy table, two chairs, a fire place with fire, a big sofa and a comfy plush chair - awesome! The blue on the couch and chairs and the yellow of the big chair are all cast in a firm rubber too, which makes everything seem even more cool for some reason. This is one of those "I'm not sure what I'll do with it but I have to have it" purchases. Looking at it now, it could work well for me Western display, if only they would make a nice "fancy" building or hotel [*cough cough brothel*] for it... 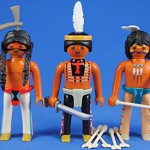 And speaking of the Western theme here's a fun pack of Indian warriors to plus out those ranks. I like the idea of the new hair piece with the two long braids but I must confess there is something "off" about it. I also appreciate the new arrows but I wish they could be held by the feathered end too so that once could make a proper archer pose. I would also appreciate a new quiver that could actually hold more than one or two of these new arrows (or that they would include the old tri-arrow filler piece) too. All in all, this is a nice set but not an exceptionally great one. 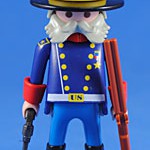 One day I will actually pick up that new Fort and when I do I will certainly need a General, and thus here he is! I'm tickled pink by the by chops with mustache facial hair he's got going on, plus his big old pot belly. As much as I enjoy them I am a bit turned off by going that route as they suggest suggest this a sedentary politician type of General, whose bumbling makes things worse rather than better. I would prefer my Fort to have a more rugged, man of action Leader, so I'll have to see what I can do about making one. My favorite thing here, though, is the medal he's wearing. It's a small detail but it makes all the difference in the world for making him feel unique and special. Plus, you get the new double-barreled shotgun to boot! 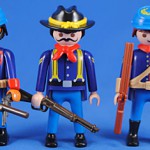 This is another good set of battle-builders to further pad out the Western troop, though it does have a serious flaw - all three guys are in different uniforms! What gives? The definition of uniform, is, well, uniformity, so this is fairly annoying. I do dig the suspenders look as a good riff on the cavalry but the red patterned jacket is just weird to me. I'm also not crazy about that guy having a darker skin tone, to be honest. Is he Mexican, Native American, or other? I just don't get it/him. Plus, odds are non-white soldiers back then were exceptions rather than the rule which makes it a bit more odd to include him as an army builder, especially since a comparable Klickie is available in the retail sets. These are individually great figures, and you do get some excellent accessories here, but as a whole it's fairly underwhelming and definitely confusing. 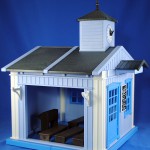 Another classic set see's it's re-issue and it's the maybe-Schoolhouse/maybe-chapel. There was some concern it wouldn't be including accessories but indeed it has the podium and six pews, which is good enough for me. I would have liked a chalkboard or some sort of wall decoration, but space is fairly tight inside as is. 15-20 years ago this basic structure was issued in a couple different colors and uses, so it would be nice to see the same happen again. The light blue is great, and certainly feels properly Old West, but there is very little use to multiples of it, especially since the it's joined by angles at all four corners so one can't really expand it. The door opens, of course, and the windows have working sections that slide up and down, which is pretty cool. This is certainly a welcome, though unexciting, addition to the town. 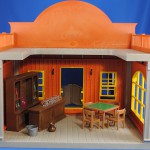 TOY BAR!!! This is another set I've been coveting for over a decade. No Old West town or story is complete without a Saloon so I was 150% thrilled when they reissued this! It's a straight re-release of the original just minus the two figures, which is only a little annoying since the front has an add for the woman singer/performer, and the male bartender was both super cool looking and had a great apron. Regardless, the two most important things are included - the bar and barback shelf!!! This is exactly why I love Playmobil - when they're at their best they create a full world to immerse yourself in. That is the core, the heart, of toys, of playthings, and Playmobil excels at it! With this set you also get four green bottle, four red bottles, a big pink bottle, five mugs, a bucket, table and chairs and even, yes folks, a gul-darn spittoon! Why aren't you buying this right now!? I do wish that it was easier to expand and/or that there was a little stage. I am so immensely happy to have this piece in my collection after 20 years, guys! 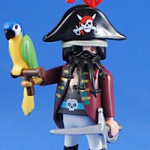 I generally haven't been too happy with the last 10-15 years worth of pirates but this guy... how awesome does this guy look!? I love the maroon coat with teal accents. It may be the historically plausible look of the guy but this is also the most I've liked the "blackbeard" beard piece ever. Plus he gets a cool parrot! I just couldn't resist - it's a such a great looking figure! 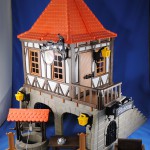 Getting this piece re-released is a bit of coup and many of us are ecstatic to see it return! Like the Bakery above this bridges the gap between Medieval Era and present Europe fairly well meaning it's pretty versatile. It's intent is as a Museum but once you pop that sign off you get a stellar batch of Steck for castle building! This includes everything from the original release except for its signature vac-metallized Knight/Armor/Statue. I know that's a deal-breaker for some but I, personally, don't miss it at all. In addition to all the Steck pieces (essentially a complete mini-house atop a big stone stable) you get a trough, table, crown, an awesome chest which opens, two stellar chairs and even a well! If you're like ol' Rustin here and just want parts to build out your Medieval village and castle this is absolutely a must-have set. 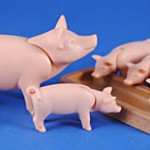 Cooooooooome on.... it's a pig and six piglets - how could I not get it!? Aside from simply being cute as heck this is great farm filler for just about every theme you could through at it. All seven animals have a hinged neck allowing for both sniffing the air and sniffing the ground poses. Plus, with the included trough you can just have them eat imaginary slop until the cows come home.

9 Responses to Rustin's Spoils of the Week #134